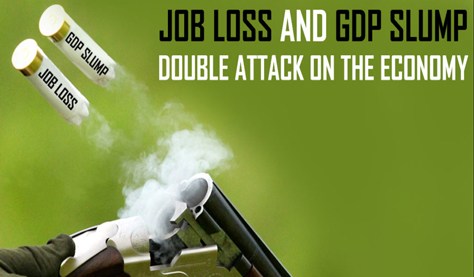 These are difficult times to be a job seeker in India. We are not saying this, but a recent report has.

Leading companies that are part of the BSE 500 have hired lesser in 2016-17 as compared to previous years. Job data for 121 companies for whom numbers were available for the fiscal year ending March 2017 show that net hiring in these companies fell from 742,012 to 730,694. This decline of 11,318 employees is most prominent across the core sectors of metal, power, capital goods, construction and FMCG, said the report. For 107 of these companies, from a high of 684,452 jobs in March 2015, numbers fell by over 7,000 in March 2016 and 14,000 in March 2017. These numbers should be seen in the light of the fact that India adds 1 million job aspirants to its labour force each month.

These falling numbers are directly proportional to GDP. Aditya Birla Group chief economist Ajit Ranade said, “It is absolutely without a doubt that the GDP has a correlation with employment and livelihood. When GDP growth rises, there would be a certain amount of job creation, and vice versa.”

Most of the government’s umbrella schemes introduced to stimulate job creation through skill development, like PMKVY (Pradhan Mantri Kaushal Vikas Yojana) have also floundered. Data for the PMKVY scheme until the first week of July 2017 reveals that out of a total 30.67 lakh candidates who had been trained or were undergoing training across the country, less than a tenth — 2.9 lakh candidates — had received placement offers.

The situation is so drastic that the members of the BJP are also speaking against the government. Former finance minister Yashwant Sinha, in an opinion piece, decided to stand up to the lies being peddled by the BJP. BJP MP Shatrughan Shina also tweeted in support of Mr. Sinha, saying that he had shown the government the mirror. Arun Shourie, a well–respected economist and former colleague of Yashwant Sinha in the Atal Bihari Vajpayee cabinet, also criticized the GST for shoddy implementation and demonetisation as the “Largest Money-Laundering Scheme Ever.”

The government’s decision to ignore well-meaning advice and stifle dissent from their own loyalists is indicative of the country’s descent to authoritarianism.

Mr. Modi rose to power promising transformative growth. However, as things stand, India’s future looks much grimmer than it did back in 2014.