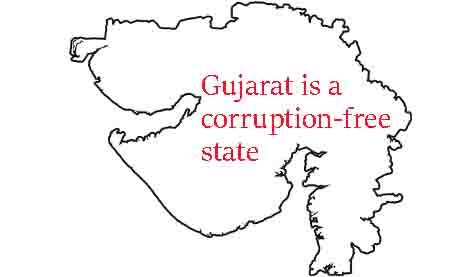 Narendra Modi, since he assumed the chief minister office of Gujarat in 2004 has been claiming to make it a model of development and based his 2014 Lok Sabha Elections campaigning on the same.

However, development has taken place in the state, but only in terms of corruption.

No matter how much ‘clean’ the BJP tries to portray itself, its hands are deeply soiled in corruption.

Let’s take you through a series of corruption cases the BJP and Modi has indulged in since 2004:

The Government gave the Tata Motors a total monetary benefit of Rs. 33,000 crore. How? The land, the market price of which was around Rs. 10,000 per square metre, was allotted allegedly at Rs. 900 to the Tata Motors Ltd. (TML).

The state government had allotted 1100 acres of land to the TML to set up the Nano plant near Sanand.

Land was allotted to Adani Group for the Mundra Port & Mundra Special Economic Zone (SEZ) at Re 1 per square metre. This is grossly lower than the market rate.

Undoubtedy, Modi is a true friend of industrialists.

The state government allotted 65,000 square metres of land belonging to Navsari Agriculture University in Surat to Chatrala Indian Hotel Group for a hotel project despite objection from the institute. This deal was allegedly brokered by the chief minister through his office causing a loss of Rs426 crore.

A huge plot of land near the Pakistan border was allotted to salt chemical companies said to be close to BJP leader Venkaiah Naidu.

The State government has allotted 2.08 lakh square metres of land to Essar Steel. A part of the disputed land is Coastal Regulation Zone (CRZ) and forest land that cannot be allotted as per the Supreme Court guidelines.

25,724 square metre land was allotted to Bharat Hotels without auction on Sarkhej-Gandhinagar Highway in Ahmedabad.

In 2008, the state government awarded contracts for fishing activities in 38 lakes without inviting any tenders; bidders were ready to pay Rs. 25 lakh per lake.

The Larson & Toubro (L&T) was allotted 80 hectare land at Hazira at the rate of Re. 1 per square metre.

Instead of auctioning prime land in the major cities of the state, the Gujarat government had allotted the land to some industries and industrialists who had signed MoUs in the five editions of VGGIS.

The Gujarat government had purchased cattle feed from a blacklisted company at Rs. 240 per 5 kg whereas the market rate is just Rs. 120 to Rs. 140 per 5 kg.

Two bidders apparently formed a cartel and bid for supplying supplementary Nutrition Extruded Fortified Blended Food (EFBF) to Anganwadi centres of the state. One company bid for three zones, while the other for only two. Guidelines were violated, causing the state exchequer a loss of Rs. 92 crore.

Instead of using commercial flights or state-owned aircraft and helicopter, the then chief minister Narendra Modi had used private luxury aircraft for around 200 trips in five years. The cost had been borne by the beneficiary industries.

Of course, Modi and the industrialists share a give and take relationship.

The Rs. 6237.33 crore Sujalam Sufalam Yojana (SSY) announced in 2003 was to be completed by 2005 but it is still not completed. Public accounts committee of Gujarat assembly unanimously prepared a report indicating a scam of over Rs. 500 crore which was not tabled.

Around 36.25 acre farmland in Kutch district was purchased and sold in violation of all norms by Indigold Refinery Ltd.

49% of the shares of Pipavav Power Station of the GSPC were sold to Swan Energy without inviting any tenders.

See, how talented and capable the BJP and its leader Modi is. Their talent to loot and fool people, both at the same time, has let them survive till now.

But the clock is ticking and their tenure is about to end, with people choosing wisely this time and bringing in the government which thinks of people welfare, and not their own.

One thought on “Corruption, corruption and only corruption in Gujarat!”