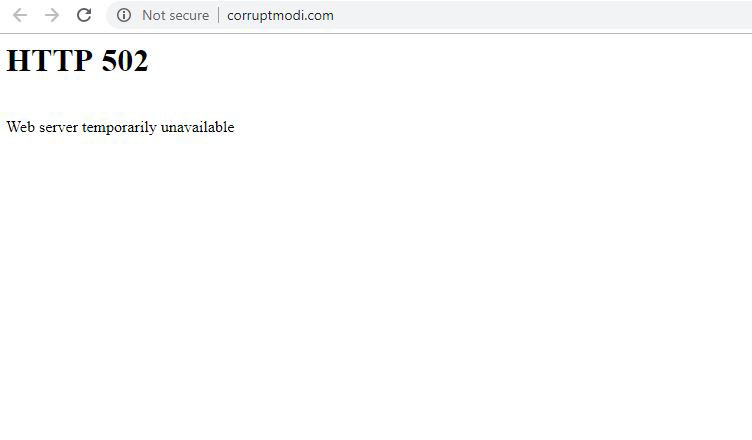 The Government is leaving no stone unturned in thwarting attempts of those critical of it. In a recent development, corruptmodi.com, a website which had recently come into existence and was like a repertoire of all the BJP scams till date, has been taken down.

On clicking the url of the website: www.corruptmodi.com, this is what it shows:

The site had mentioned all the BJP scams in an alphabetical order, starting right from the alphabet ‘A’ and listing scams such as the 2005 Adani Land scam and the 2016 ABCD scam and ending at ‘Z’ with the 2017 Zubin Irani Land scam.

Lately, the site was getting good traction and its visibility had increased. Such, is the Govt’s insecurity that even a small and barely launched site is inviting the Govt’s wrath.

This is part of the recent trend where all dissenting voices have been stifled by the government, be it journalists, news channels or websites.

The government has been closely monitoring all the news mediums, be it the print media, broadcast news or the Internet. Any media which the government thinks is going against its agenda has to face its wrath.

However, corruptmodi is not the first victim. Many other media outlets such as NDTV, The Wire, Cobrapost have also bore the brunt of the same, but never to this extreme.

When contacted the owner of the website, we were informed that Indian Computer Emergency Response Team (CERT) had taken down the website without giving any definite reason.

What could be the reason other than the website exposing the large scale corruption that this government is involved in.

It is condemnable. After all, it is a democracy and freedom to expression is one of our constitutional rights.

Instead of stifling, the government should accept the criticism that comes along it way.