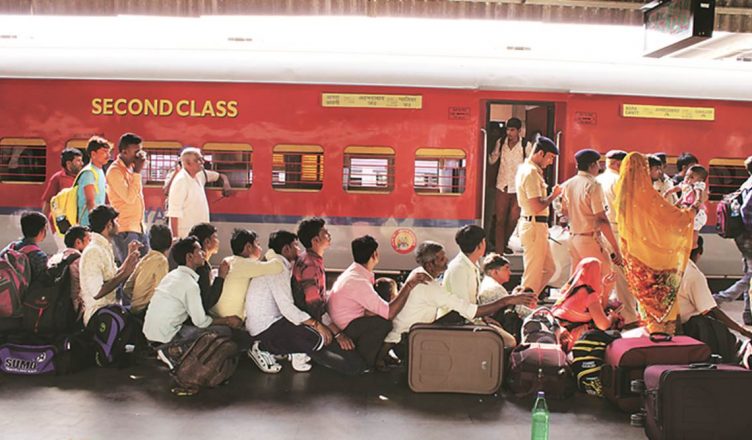 As India’s 133 Crore population goes under lockdown, the ones to suffer the most are daily wage workers. Three hundred migrant labourers were found crammed inside two trucks, while thousands were travelling secretly in an empty railway rake. This a classic example of those desperate migrant labourers who are trying to get home to their villages, by any means, to survive.

In Yavatmal, Maharashtra, police encountered trucks full of migrants during a routine inspection at a police check-post on the state’s border with Telangana. The Yavatmal Superintendent of Police, M Rajkumar, said that the drivers claimed to be transporting essential goods to Rajasthan. But when the police and revenue officials checked the trucks, they came upon three hundred scared men crouching inside.

“The men are primarily construction workers returning from Hyderabad to different parts of Rajasthan,” Rajkumar said, further adding that his team were probing how they had managed to travel all the way from Hyderabad without being stopped.

Similarly, the Uttar Pradesh authorities told the Railways about the incident of labourers travelling illegally in a railway rake. The rake was being brought back from Thiruvananthapuram to Gorakhpur, as part of a nationwide measure by the Railways for rakes stranded because of the lockdown. While it is known that most of the men got off at Jhansi, officials aren’t sure about where they got on from.

Railway sources said railway managers of various divisions had told the ministry about the many requests of labourers to let them travel in empty rakes. After the matter was highlighted at a video conference on Thursday headed by Railway Minister Piyush Goyal, the movement of all empty rakes has been stopped for the time being.

After officials realised that the migrants had come in the rake from Kerala to UP, railway authorities looked through CCTV footage’s to figure out where they had got on. They slashed Thiruvannanthapuram or Ernakulum, from their options from where the rake had stopped. They claimed that while they didn’t have an exact figure, they estimated around 300 labourers used the rake.

“The matter has been brought to our notice and we are looking into it,” said Arun Kumar, Railway Protection Force Director General.

Before this, the Railway Board had identified more than 600 rakes that were stuck away from home bases due to the nationwide lockdown. While ordering that these be brought back to home bases, the ministry had asked officials to ensure that there was no boarding without proper authorization, with stops only allowed for crew changes.