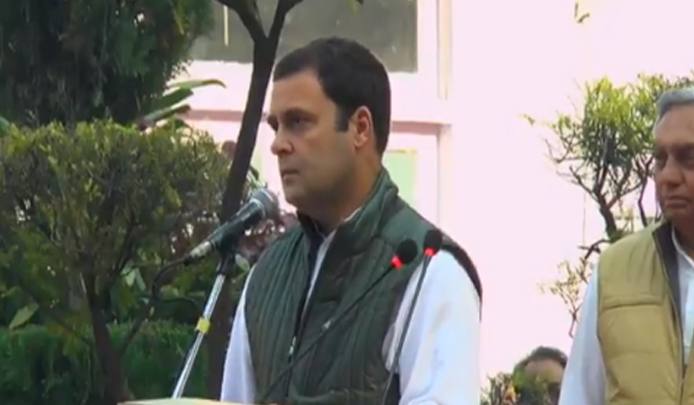 Reacting to Union Minister Anantkumar Hegde’s “will change the Constitution” remark, Congress President Rahul Gandhi on Thursday said that the foundation of the country is under attack and that it was the duty of the Congress and every single Indian to defend it.

“Today, it is distressing to see that this document (the Constitution), the foundation of our country is under attack. It is under attack directly. Statements are being made by senior members of the BJP and it is under attack from the back,” Rahul Gandhi said while speaking on the occasion of the 133rd Foundation Day of the Congress.

Launching an attack in the BJP for using lies to gain political benefit, the Congress President said that the grand old party has always stood for the truth and will continue to do so.

“The central idea of the Congress Party is the truth. We accept the truth, we work with the truth and we fight for the truth,” Gandhi said.

“What is happening today in our country is a web of deceit. The BJP operates on the basic idea that a lie can be used for political benefit and it is the difference between us and them. We might not do well, we might suffer, we might even lose but we will not give up the truth,” he added.

Gandhi also unfurled the flag at the AICC Headquarters in Delhi on the occasion.

The good part being that Union Minister Hegde, realising that he had made an outrageous statement, has apologised for the same and said that the Constitution is supreme for him.

Earlier, Hegde had said, “people who call themselves secularists… are like people without parentage or who don’t know their bloodline”, and that the BJP has come to power to “change the Constitution”.