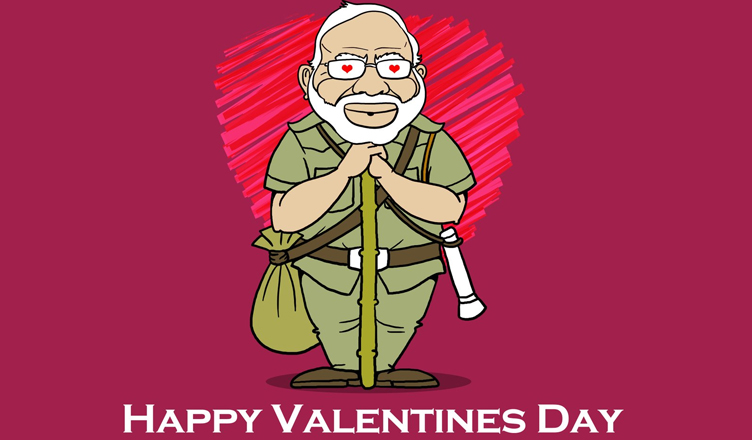 It’s Valentine’s Day today and everybody is busy making their special ones feel special.

It is rightly said that all is fair in love and war and when it come to politics it’s no different, and so the Congress Party on Thursday took to Twitter to make its political opponent, the Bharatiya Janata Party (BJP) feel ‘special.’

Congress tweeted six cards on its timeline, with each card for a specific BJP leader, and used the day for taking a jab at the saffron party leaders.

The first card put out by Congress features a love-struck Prime Minister Narendra Modi. He is dressed in a chowkidar’s clothes and can be seen asking, “Are you Anil Ambani? Because I want to be your chowkidar!”

Congress also gave a message of loving everybody and not hating, with every card that it posted.

This is a reference to PM Modi, who has been accused of indulging in crony capitalism and favouring entrepreneur Anil Ambani in the controversial Rafale deal.

Another card with Defence Minister Nirmala Sitharaman was tweeted out, with tape on her mouth, indicating her to be  mute spectator in the Rafale deal.

The tweet read, “The Silencer: You say it best, when you say nothing at all!”

The Silencer: You say it best, when you say nothing at all!

Next in line was PM Modi’s favourite and BJP president, Amit Shah. The poster read, “Are you an MLA? Cos I would like to trade horses with you!”

This was a clear reference to accusations put on BJP in Karnataka of horse–trading members of the Congress-JDS coalition in the state.

Next love post was for Railway Minister Piyush Goyal, who was recently massively trolled on social media for tweeting a video of the semi-high speed train Vande Mataram Express in a fast-forward mode.

The Congress used the occasion to remind the leader of his goof up.

The poster read, “Are you a high-speed train? coz in my head, you’re moving at 2x speed” line.”

Taking potshots at Uttar Pradesh Chief Minister Yogi Adityanath, who was on a name-changing spree till a few days back, the Congress posted a card that read, ” Aaj se tumhara naam ‘meri’ hai!” (From today your name is Mine!)

The last poster was dedicated to Union Minister Smriti Irani. It is well-known that Irani’s educational qualification is still an unanswered mystery and how once when she had claimed that she had a degree from Yale University, but it turned out to be a three-day conference.

Using the same topic to mock at the Minister, the Congress’ poster read, “Are you a degree from Yale? Because I want you!”

The tweet posted along with the poster was a funny one. It said, “The Walking-Talking Meme: Main Tulsi, Yale ke garden ki!”