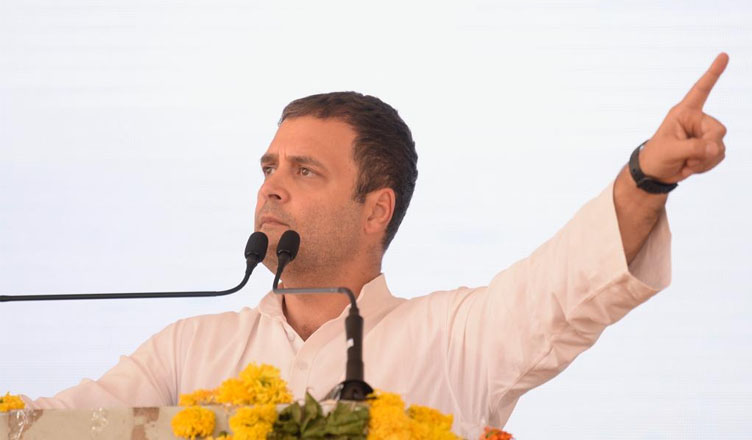 Congress president Rahul Gandhi on Thursday said that the Congress will work for the poor.

The Congress chief promised that they will take care of everything, right from health, education to establishing food processing plants in every district and providing employment.

“We will provide medicines for every poor in Rajasthan. The Congress party will implement a food processing plant near farmers’ farms in every district and the youth will get employment in it. Farmers will sell their goods directly at the Food Processing Plant,” Gandhi said while addressing a rally in Rajasthan’s Sikar.

“Vasundhara ji closed 25000 schools. We will open the best government schools, colleges and universities for you,” he said.

Slamming the government’s move of Demonetisation, the Gandhi scion said that the common man’s money was transferred into the pockets of corporates like Nirav Modi, Mehul Choksi and Vijay Mallya.

Also read: Before Alok Verma was sent on leave, seven key cases were pending before him

“Do not forget Demonetisation when PM Modi made everyone stand in queue and deposit their hard earned money in banks. This money was used to fill the pockets of Nirav Modi, Anil Ambani, Mehul Choksi, Vijay Mallya,” he said.

He further claimed that the UPA government gave approval for water projects worth Rs. 2600 crore in Sikar but the BJP government did not do any work.

Bringing up the issue of ouster of CBI director Alok Verma, Gandhi alleged that after Prime Minister Narendra Modi came to know that the CBI chief was planning to initiate investigation into the controversial Rafale deal, he sacked him midnight.

“At midnight 1AM, when the whole country was sleeping, PM Modi who calls himself ‘Chowkidar’ removed CBI Director who was investigating the Rafale Scam,” he said.

Earlier in the day, Rahul Gandhi attended the state-level convention of Mahila Congress and pitched for the participation of more women across various levels in the Congress.