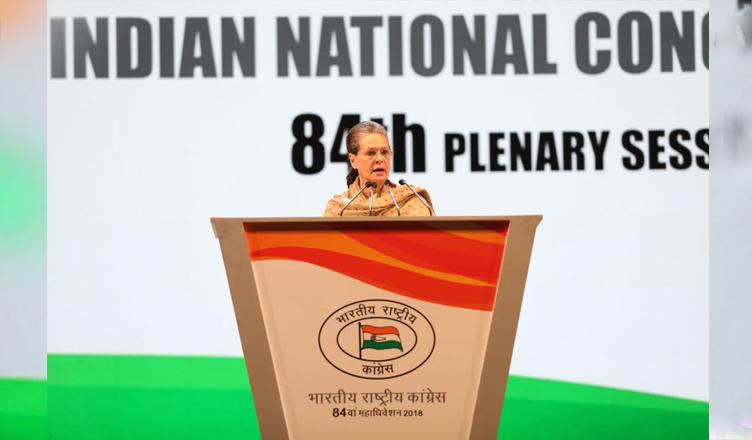 Former Congress president Sonia Gandhi while speaking at Congress party’s plenary session at the Indira Gandhi Indoor stadium in New Delhi today attacked Prime Minister Narendra Modi, calling his government “arrogant” and asserted that Congress has never cowered down and it will never cower down. She said that the policies that were implemented during the UPA rule to benefit the people were being weakened by the Modi government.

“Under the leadership of former PM Dr. Manmohan Singh, the economy of this country flourished. Our government formed policies which lifted millions of people from poverty. And today, Modi govt is weakening these policies,” Sonia Gandhi said.

Furthering her attack, the UPA chairperson said that the people have begun to realise that the promises made by the BJP were nothing but hollow.

“Congress is fighting the tyrannical Modi Govt. People have begun to realise that the promises made by the BJP in 2014 were hollow,” she said.

Praising the grand old party, Sonia Gandhi said that Congress is a party that is an idea several years ahead of its time.

“There is only one priority: How to make Congress party stronger. Congress is not just a party, but an idea several years ahead of its time. There has been a conspiracy since the last four years to destroy the Congress. But, the Congress is exposing these designs of the present arrogant government,” she said.

“40 years back, Indira Gandhi’s stunning victory in Chikmagalur turned around Indian politics. With Karnataka assembly election, the Congress will rise again,” she said.

Congratulating Congress President Rahul Gandhi on his appointment, Sonia Gandhi also appreciated all the Congress workers of the states where the grand old party is not in power.

“I congratulate Congress President Rahul Gandhi on his appointment and extend my best wishes. The responsibility of the party has rested upon his shoulders during a challenging time. I also want to thank those Congress state workers where our party is not in power and yet have withstood all the torture,” she said.

“Today a new chapter of the Congress party has begun. We need to build a nation that provides for every citizen. Every Congress member will dedicate their life to take this nation to great heights,” she concluded.