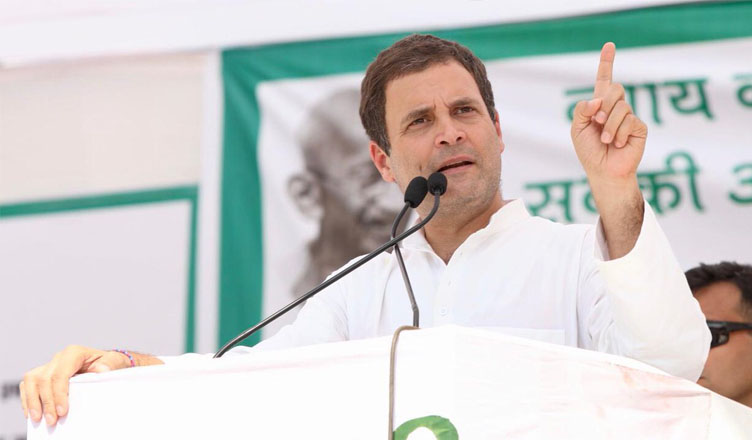 Congress President Rahul Gandhi on Saturday promised to give back the rights, snatched by the current Bharatiya Janata Party (BJP) government, to the marginalised section of the society.

Gandhi drew a contrast and said that while the BJP exploits the marginalised, Congress has always stood with them and will continue to do so.

“Today, farmers, Aadivasis, Dalits and minorities are exploited. One by one their rights are being taken away from them. On one side there is BJP, on the other side are the marginalised and the Congress party standing with them. We promise, we will give you your rights related to water, forest, land. We will not give up,” Rahul Gandhi said while addressing a gathering in Madhya Pradesh’s Morena.

“We brought in Tribal Bill, but BJP does not want to implement it. As soon as Congress Party comes to power in Madhya Pradesh, Rajasthan and Chhattisgarh, we will bring the tribal bill into force. I have always thought of people’s rights in all my actions,” he added.

Highlighting the woes that the farmers of the country are facing, the Congress Chief assured that all the grievances will be addressed as soon as the grand old party comes to power.

He said that they have mentioned in their manifesto that the Congress party will pay the insurance to farmers on the basis of their farms.

“Farm loan waiver will provide relief to farmers but it will not end their woes. The solution is to transform the lives of farmers,” he said.

Furthering his attack on the BJP government, the Gandhi scion said that the money given to Anil Ambani via the Rafale deal could have been used to implement MNREGA in the country.

He then reminded the people of the work Congress did in the same direction by empowering grassroot administrations in the form of Panchayat.

“Our intention was to empower grassroot administrations like Panchayat who are chosen by you. And any contention for land acquisition should be resolved in Panchayats. MNREGA was another example for this. Congress allocated ₹35,000Cr to MNREGA. But BJP is taking away all the funds allocated to this scheme. Today, the amount allocated by Congress to MNREGA is the same stolen by Nirav Modi. ₹30,000 crore given to Anil Ambani would have helped to implement MNREGA in the entire country,” he said.

Also read: How is Swachh Bharat possible without toilets?

Gandhi also accused the BJP of killing the Land Acquisition bill in those states where it is in power.

The ruling government has tried to form a narrative that nothing has been done in the past 70 years, but Rahul Gandhi, through his speech, reminded people about landmark decisions such as framing of the constitution, Right to Vote, Green Revolution, White Revolution, taken post Independence and which empowered individuals and enabled India to compete against global superpowers like USA.

Rahul Gandhi then appealed the people to understand the intention of a person.

“You will able to choose the right person only if you understand his intentions,” he said.

Later in the day, Gandhi will perform Narmada puja at Gwari ghat, followed by a roadshow in Jabalpur.

He will also hold a public meeting at Raddi Circle at 7 p.m.