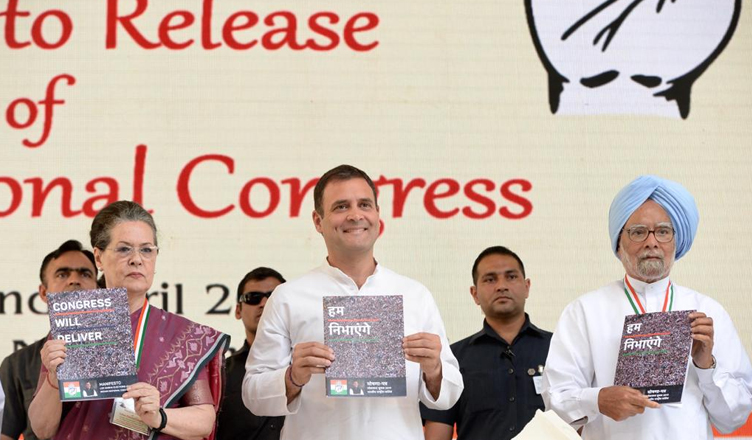 The Congress on Tuesday released its manifesto for the upcoming 2019 Lok Sabha elections.

Congress President Rahul Gandhi talked about the five ‘doable’ big ideas which the manifesto focuses on, apart from other things.

He also stressed on the fact that the party manifesto was not made in closed room but they ensured that voice of the people was also taken into consideration while preparing the manifesto.

“When we started this process about a year back, I spoke to Chidambaram and Gowda and gave them 2 instructions. I said this is not a manifesto to be made in closed room but it should reflect the visions of the people of India. Second, whatever is there in this manifesto, it has to be truthful and no lies because I have been hearing lies every day from our PM (Narendra Modi),” Gandhi said at the time of the release.

Manifesto has 5 big ideas, they are:

First theme is that of NYAY:

“The PM said to give 15 lakhs in every account and the entire country knows that it is a lie. ‘Gareebi pe vaar, 72 hazaar.’  20 per cent of the poorest families will get Rs. 72,000 annually directly into their accounts,” Gandhi said.

Second theme is that of employment and jobs:

“Youth are unemployed. PM Modi talked about 2 crore jobs, which is a lie. I wanted to know the truth. The manifesto committee told me 22 lakh government post are lying vacant which will be covered by us by 2020. Indian youth will not have to take any formal permission for the first three years of their business set up,” the Congress Chief said.

“The entire country knows MGNREGA helped people. We will increase the 100-day guarantee to 150 days guarantee to MGNREGA workers,” he said.

Farm loans were waived off in Chhattisgarh, Rajasthan, Madhya Pradesh, Karnataka and Punjab. We have thought about 2 major things for farmers:

Fifth theme is on education and health:

“We have decided that 6 per cent of the GDP (Gross Domestic Product) will be diverted towards education. Under the Narendra Modi government, this was reduced,” Gandhi said.

“Under healthcare, a scheme has been brought by the present government. We don’t believe private-based insurance healthcare. We will focus on to provide high-quality hospitals and treatment to the poorest of the poor of the country,” he added.

Gandhi also said that the Congress party will work towards uniting the country and that their emphasis will be on national and internal security.