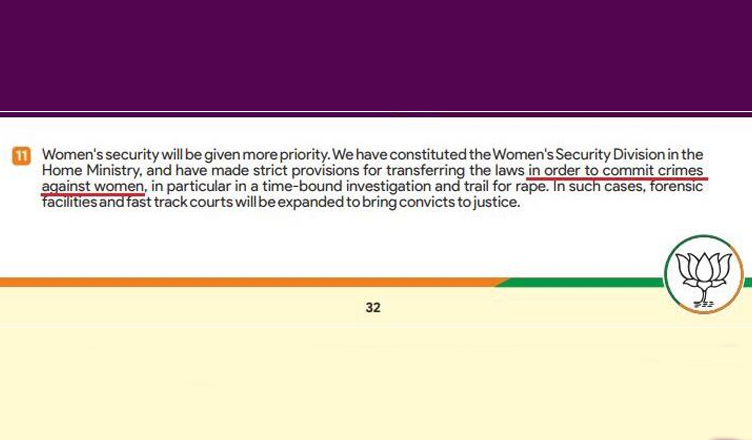 The Bharatiya Janata Party (BJP) on Monday released its manifesto for the upcoming Lok Sabha elections. As expected, it made a plethora of promises ranging from doubling farmers’ income by 2022 to lowering tax rates.

However, it made a major goof-up in its manifesto.

The Congress was quick to proof-read the document and pointed out the mistake.

“At least one point in BJP’s manifesto reflects their true intentions. #BJPJumlaManifesto,” it said in its tweet.

At least one point in BJP's manifesto reflects their true intentions. #BJPJumlaManifesto pic.twitter.com/b5CqRrOz0E

The same paragraph has another mistake where the word ‘trial’ has been typed as ‘trail.’

In another tweet, Congress attacked the BJP saying that the saffron party’s manifesto reminded them of their own 2014 manifesto.

“This copy-paste Manifesto is giving us serious déjà vu from 2014. #BJPJumlaManifesto,” it tweeted.

This copy-paste Manifesto is giving us serious déjà vu from 2014. #BJPJumlaManifesto pic.twitter.com/lZcn2vYxRk