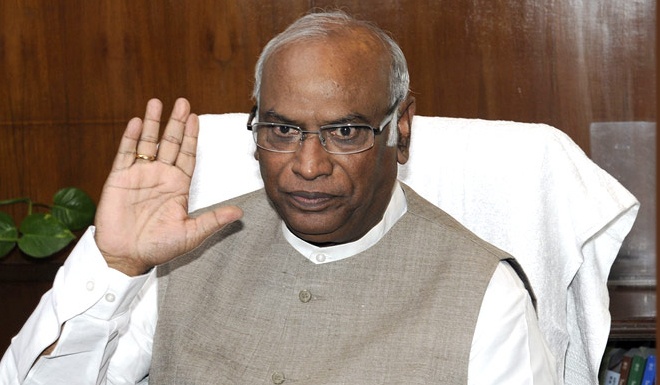 The leader of the Congress in Lok Sabha Mallikarjun Kharge has written to Prime Minister Narendra Modi stating that he will not attend the Lokpal meeting, wherein he has been invited as a ‘special invitee’.

“The ‘Special Invitee Invitation’ is a concerted effort to exclude the independent voice of the opposition altogether from the selection process of the most important anti-corruption watchdog. It negates the letter and spirit of the Lokpal and Lokayukta Act, 2013 in toto,” Kharge wrote in his letter addressed to PM Modi.

The Congress leader also targeted the Modi Government over the delay in appointment of Lokpal for four years.

“Congress-led UPA passed the Lokpal Act, 2013 and had brought it into force w.e.f January 16, 2014. Notwithstanding your repeated rhetoric to fight corruption, BJP government has chosen to not appoint a Lokpal for nearly four years,” he said.

“If your government is, indeed, serious about ensuring that the Lokpal is appointed with the sanctity it deserves, I would suggest that you bring in an ordinance in shape of the amending bill that is annexed herewith and place the same before Parliament as it reopens in March 2018,” he added.

Resuming his tirade against the Central Government Kharge said, “This amending bill continues to languish in the cold storage for want of appropriate intent, commitment and objectivity on part of the government.  My mere presence as a ‘Special Invitee’ without rights of participation, recording of opinion and voting would be a mere eyewash, ostensibly aimed at showcasing the participation of opposition in the selection process”.

The government had earlier this month told the Supreme Court that the leader of the single largest party in the Opposition will be invited to attend the meeting on March 1.

In April 2017, the apex court had directed the government to immediately implement the Lokpal and Lokayuktas Act and appoint a Lokpal.