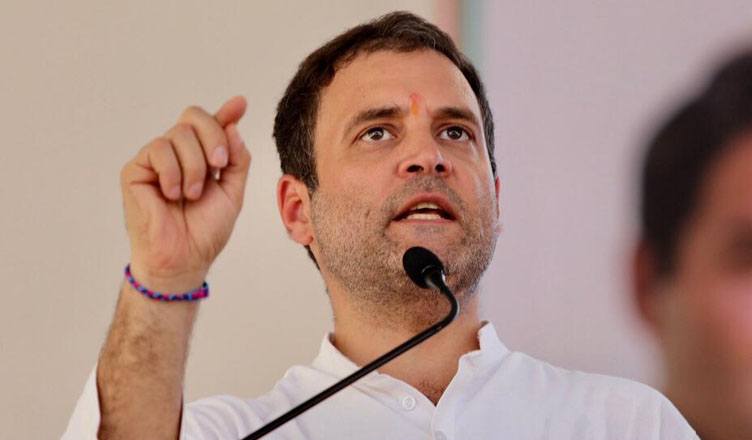 Congress President Rahul Gandhi sounded the poll bugle in Rajasthan on Thursday and said that his party will fight the elections in the state with unity and alleviate the suffering of the people in Rajasthan.

While addressing a gathering in Sagwara, Rajasthan, Gandhi said that ‘achhe din’ have only arrived for the India’s richest.

The Congress Chief assured that the Congress will bring in development and prosperity for the state of Rajasthan.

“Railway budget of India is ₹1,50,000Cr. But, PM Modi announced bullet train of ₹1,00,000Cr that only benefits a handful of people. The Congress party had announced railway lines worth ₹2000Cr to connect the districts of Rajasthan. But BJP govt cancelled this project. We will implement this when we come to power,” he said.

Talking about Rajasthan Chief Minister Vasundhara Raje- Lalit Modi link, Gandhi said that the BJP government works for these kind of people only.

“Today , whatever happens, happens only to benefit a handful of people,” he said.

Asserting confidence, Gandhi said neither Vasundhara Raje nor Modi nor thier money can save the Rajasthan BJP government.

“Here will be formed, not Congress, but people’s government,” Gandhi said.

Targetting Raje’s ‘Gaurav Yatra’, Gandhi said the petrol and diesel in the vehicles of ‘Gaurav Yatra’ of BJP has been bought with the money stolen from common people.

Earlier in the day, Gandhi visited the Gayatri Mandir in Sagwara.

He also met party workers in the state and encourage them to keep up the good work that they are doing.

The Congress President is expected to visit Rajasthan again in October.