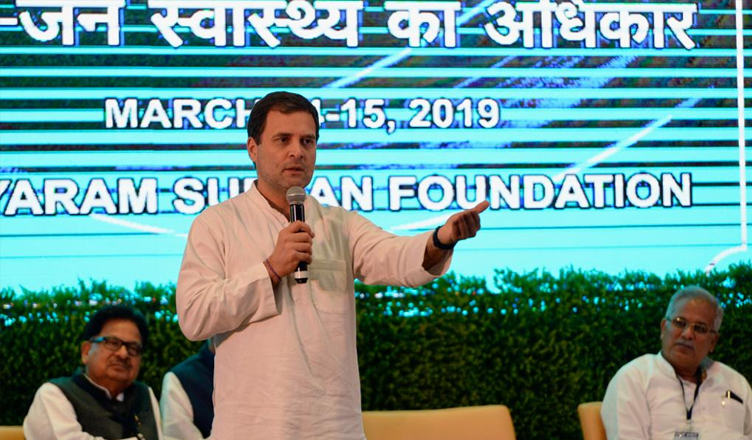 Congress President Rahul Gandhi on Friday said that if the grand old party comes to power in 2019 it bring in a Right to Healthcare Act as well as increase the amount of money put in healthcare.

“Congress government in 2019 is dramatically going to increase the amount of money we put in healthcare and education. In our manifesto, we are considering a Right to Healthcare Act, where we will guarantee certain minimum healthcare to all Indians, increasing our expenditure to about 3% of GDP and increasing the number of healthcare professionals,” Gandhi said while interacting with health professionals in Raipur, Chhattisgarh.

Criticising Ayushman Bharat for taking into consideration only a few stakeholders, the Congress Chief said that he views healthcare provision as something that is done by a large number of stakeholders.

“My main criticism of Ayushman Bharat is, it gives insurance without a proper support structure from hospitals and medical professionals,” he said.

“I view healthcare provision as something that is done by large number of stakeholders- ASHA workers, doctors and other medical professionals, businesses etc. Each stakeholder’s territory should be defended. One of my complaints about what the BJP does is that they only look at one or two stakeholders. I’m sensitive about voice, each one of the stakeholder should be heard,” he added.

He further said that Ayushman Bharat is a scheme targeting only a limited number of healthcare issues. It is a handout to the richest businessmen in India.

Prime Minister Narendra Modi launched the Pradhan Mantri Jan Arogya Abhiyan, popularly known as Ayushman Bharat on September 25, which marked the birth anniversary of Pandit Deendayal Upadhyay, while claiming that the scheme was going to be a game-changer in the lives of the poor and needy.

PM Modi also declared the scheme as the world’s largest healthcare initiative and claimed that it would serve as many people as total population of 27-28 European countries. “The beneficiaries are almost equal to the population of Canada, Mexico and US put together,” PM Modi had announced.

As per a report by National Herald, the healthcare scheme fails to stand true to the claims as made by the Prime Minister. Neither is it the world’s biggest healthcare scheme nor it is a very effective scheme. On the contrary, it opens up new ways for corruption.