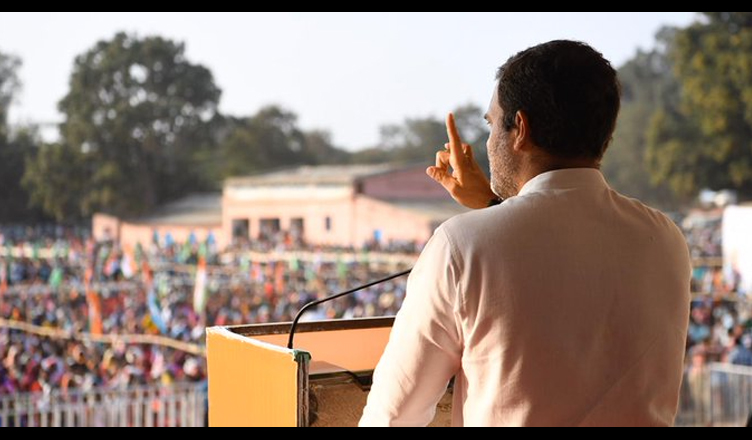 Criticising the Bharatiya Janata Party (BJP) for failing to develop Jharkhand and address its issues, Congress leader Rahul Gandhi on Monday said that the grand old party will transform Jharkhand in a similar way as it has transformed Chhattisgarh.

While addressing a rally in Simdega, Jharkhand, Gandhi said that there is no shortage of wealth in states like Jharkhand, Chhattisgarh but the BJP, instead of benefitting the common man and the poor, gives everything to industrialists.

“Wherever BJP has government, industrialists get land easily but, farmers and tribals do not get the right price for paddy. We ensured right price to paddy farmers in Chhattisgarh and waived loans in Congress-ruled states We will protect the water-forest-land of the tribals of Jharkhand. We will waive off farm loans and ensure employment for the youth of Jharkhand,” he added.

Launching an attack on Prime Minister Narendra Modi over his two major announcements of demonetisation and GST, the former Congress president said that both the things were used to snatch money of the poor and give it to industrialists such as Vijay Mallya and Anil Ambani.

“Modi did demonetisation saying he wanted to deal with black money. However, mothers and sisters of Jharkhand had to bear the brunt and stand in bank queues. No dishonest people were seen in that line, all honest people had to face trouble. After all, who benefited the most from demonetisation and GST? Modi ji’s friends. Modi ji has 10-15 industrialist friends, who take care of his marketing expenses,” he said.

“They only have one agenda- to take away money from the farmers and common man of Jharkhand, snatching land from tribals and give it to their 10-15 friends. We do not want such a government, but a government of the poor and the tribals,” he added.

He further said that if the water-forest-land of Jharkhand has to be protected, then the Congress coalition government will have to be brought, otherwise Jharkhand will suffer big loss.

“Our great country is not a country of any one ideology. Different ideologies, religion, caste, thinking exist here. Congress is such a party that carries all these together. Congress never discriminates on the basis of religion, culture or caste. We do not believe in violence, we believe in moving ahead with love and this is the thinking of India,” he said.

One thought on “Congress coalition govt will usher in wave of development in Jharkhand: Rahul Gandhi”