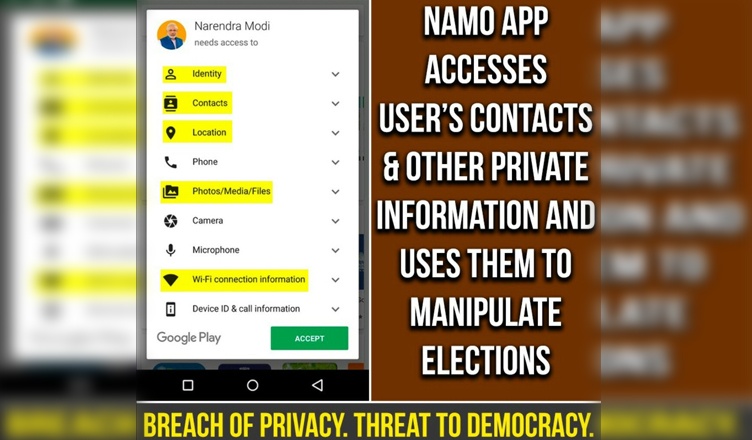 “If there’s one thing you do today, let it be this- #DeleteNaMoApp,” tweeted Divya Spandana, head of Social Media and Digital Communications AICC yesterday. The Congress Party on Friday asserted that Prime Minister Narendra Modi’s NaMo app is being used to extract personal information of Indian users. Ever since the Cambridge Analytica scandal broke out, many political parties have come under the scanner for being in with some kind of association with it.

U.S. President Donald Trump took its services at the time of U.S. Presidential Elections 2016, and if reports are to be believed, even Prime Minister Modi is its client. According to the Congress, the personal information extracted with the help of NaMo app will be used to influence the upcoming elections. Also, the grand old party had clarified in the beginning itself that it was never associated with Cambridge Analytica.

Uninstall the Namo App from your phone- Do it now! https://t.co/NQBFJhDSrq

If there’s one thing you do today, let it be this- #DeleteNaMoApp

Here is an interesting video which will help you to understand this trap better:

What is funny is that what BJP thought as a diversionary tactic to divert attention from the news of 39 Indians being killed in Iraq, has come back to it to haunt it. Now, they have to justify their association with this firm and prove that they did not use its services ever. But, we are sure it would be very tough for them to establish it.