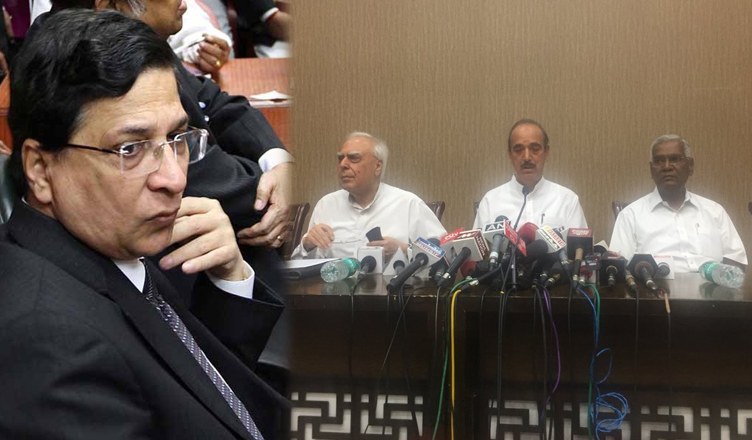 Seven opposition parties including the Congress today submitted a petition with signatures of 71 MPs (six are now retired) to Vice-President M. Venkaiah Naidu for Chief Justice of India (CJI) Dipak Misra’s impeachment. “We had the option of keeping quiet, but we have taken an oath on the Constitution that we will protect it from all kinds of attacks, This is our democratic, constitutional right. The constitution has only one way to rectify it. There is no other way forward than to move for the impeachment of the CJI, and we do so with a very sad heart,” Congress leader Kapil Sibal said while interacting with press.

Seven parties have supported the move of impeachment. The opposition listed five grounds of misbehaviour in its petition, including the CJI abusing power by sending selective cases to handpicked benches. The Congress also denied this move being anyway connected to the Supreme Court’s decision of refusing an independent probe in Judge Loya’s death. Sibal asserted that judiciary holds a very special place in the framework of our Constitution and if its independence is not maintained the democracy will flounder. “71 MPs had signed the impeachment motion, but as 7 have retired, the number is 64 now. We have more than the minimum number needed to entertain the motion and we are sure that the Honourable Chairman will take action,” Leader of Opposition in Rajya Sabha, Ghulam Nabi Azad said.

The opposition also stated that even the judges of the Supreme Court felt that the same. They also felt that the independence of the Judiciary was under threat. “When the judges of the Supreme Court themselves believe that the Judiciary’s independence is at threat, alluding to the functioning of the office of the CJI, should the nation stand still and do nothing? There have been situations where questions have been raised about the manner in which certain cases have been dealt with. There have been internal ramblings,” Sibal said.