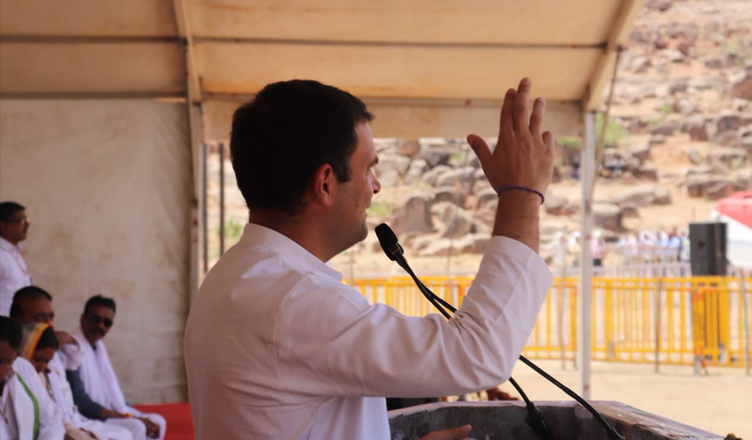 Launching a scathing attack against him, Congress President Rahul Gandhi on Tuesday said that the term ‘Chowkidar Chor Hai’ was coined because Prime Minister Narendra Modi made false promises throughout the last 5 years.

“In these 5 years, PM Modi only made false promises. Because of their false promises, the slogan of ‘Chowkidar Chor Hai’ came into existence. The BJP (Bharatiya Janata Party )has complained it to the Election Commission. But this is the voice of the public, how will you stop it?” Gandhi said while addressing a public meeting in Tikamgarh, Madhya Pradesh.

“Modi made a false promise of Rs 15 lakh to the poor people of the country. He broke their dreams. Therefore, through the NYAY scheme we will transfer an annual amount of ₹ 72,000 in the bank account of 5 crore women.

He further accused PM Modi of spreading rumours about taking money from the middle-class to fund the NYAY scheme. However, the Congress Chief clarified saying that the money would be taken from PM Modi’s friend Anil Ambani.

The Gandhi scion further said that a chowkidar cannot be found in front of the homes of farmer, labour but there is a line of chowkidar outside the houses of Anil Ambani, Adani and PM Modi is one of their chowkidar.

“Modi ji acted as the chowkidar of 15 people. I will help you. Whatever you will say, I will do it,” Gandhi said.

One thought on “‘Chowkidar Chor Hai’ was coined because PM Modi made false promises all these 5 years: Rahul Gandhi”