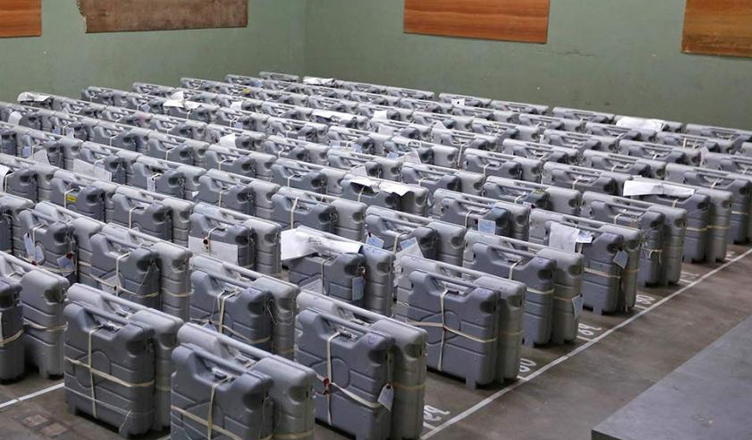 A Border Security Force (BSF) sub-inspector was removed from duty after he was allegedly found using a laptop outside an Electronic Voting Machine (EVM) strongroom in Chhattsigarh.

According to officials, Vikram Kumar Mehra, belonging to the 175th battalion of the Border Security Force was allegedly found using a laptop outside an EVM strongroom in Bemetara district of Chhattisgarh, following which he was removed from duty at the strongroom.

Bemetara Collector Mahadev Kawre told news agency PTI that Congress leaders raised objection over the use of laptop outside the strongroom on Tuesday evening after which local officials took action.

Mehra’s laptop was seized and its contents were checked by a team of officials. Further action will be taken accordingly.

Leader of Opposition T S Singhdeo of the Congress in a statement, “Incidents of violations of security in strongrooms were being reported from several places in the state which raises questions over role of the state government and administration in conducting a fair poll.”

Singhdeo further alleged that an officer and four people were found to be present in the strongroom in Dhamtari district with a laptop and mobile phones and for a period of about three hours.

He further claimed that strongrooms in Dhamtari district and several other places also reported incidents of violation of security measures.

Demanding strict action against the BSF personnel, the Congress leader said that the Election Commission of India (ECI) and the state government should take serious cognisance of the same.

Earlier on December 1, the Congress accused the Bharatiya Janata Party (BJP) of trying to subvert the mandate of people and said that faulty EVMs seemed to be far more in abundance in areas where the grand old party is believed to be doing very well.

Chhattisgarh elections were held in two phases – November 12 and November 20.

The counting of votes will take place on December 11.