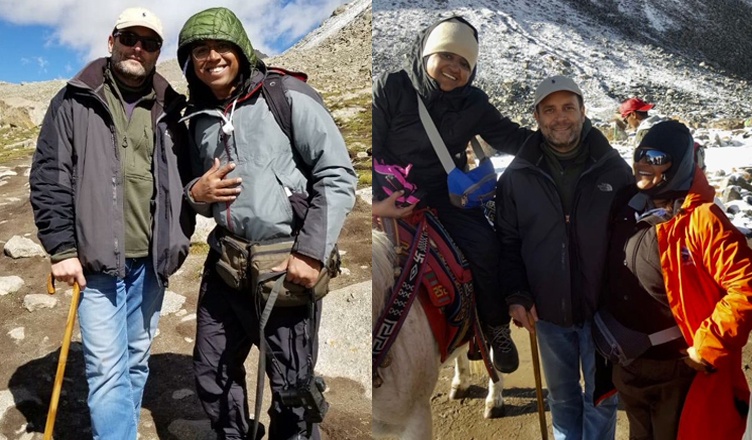 On September 5, when Congress President Rahul Gandhi released a couple of images of Lake Mansarovar while on a pilgrimage to Kailash Mansarovar, trolls started questioning the authenticity of those images and said that the images were taken from the internet and posted as from yatra.

Since then, the lovers of fake news and the ones carrying the burden of spreading fake propaganda have been targeting the Congress chief and questioning if he has really gone to Kailash Mansarovar.

While, no matter how long it takes, the truth comes out in its own way.

The Congress Chief could have resorted to many things, such as posting selfies and multiple images of Kailash Mansarovar to prove his presence there but some things are better when left unsaid.

However, another set of pictures have gone viral on social media of Rahul Gandhi posing with his fellow pilgrims. The images have been put out by multiple Twitter users.

Have a look at some of the pictures tweeted:

All those bjp trolls, see these pictures and squirm in your lies and fake propaganda about @RahulGandhi's #KailashMansarovarYatra
He completed the Holy parikrama in 2 days.
This is at Dolmala 19000 ft@MODIfiedVikas
@DrGPradhan@MrsGandhi pic.twitter.com/XIkWNv9Wsh

May Lord Shiva Bless @RahulGandhi for his #KailashYatra.

This one is our favourite:

Other tweets also targeted the right-wing trolls trying to set the narrative around Rahul Gandhi not undertaking the pilgrimage:

To all Bhakts here is @RahulGandhi doing his pilgrimage.
Bhakts Stop doubting and start praying for your end is near.
Om Namah Shivaya! pic.twitter.com/9TFjZc7IG5

Here's @RahulGandhi at Kailash Mansarovar Yatra, with a fellow pilgrim!

Here’s a video of the Gandhi scion having a conversation with his fellow pilgrims:

Haters gonna hate, but here's @RahulGandhi during his #KailashYatra pic.twitter.com/ojlwt5Oywn

Earlier, a few loyalists of the BJP started ranting and accusing Gandhi of posting photos from the internet as that from his pilgrimage.

However, as usual, this time also, the fake news machinery of the saffron party failed to spread this narrative.

On doing a Google reverse-image search on both the photos tweeted by Rahul Gandhi, it was found that the same photo was on two web portals – Loktej and The Indian Awaaz – which carried articles about the Congress Chief tweeting these pictures.

Of course, when anyone uploads a picture online it gets picked up by Google and starts showing up on the search engine. But of course, the BJP cadre lacks the common sense to understand such a common thing, or they are so busy propagating their fake narratives that they fail to measure rationality involved in the same.

As one of the tweets above read, ‘haters gonna hate’ but it is undisputed that Rahul Gandhi is on a pilgrimage to Kailash Mansarovar and his pictures prove that he is having a good time in the lap of nature and God.