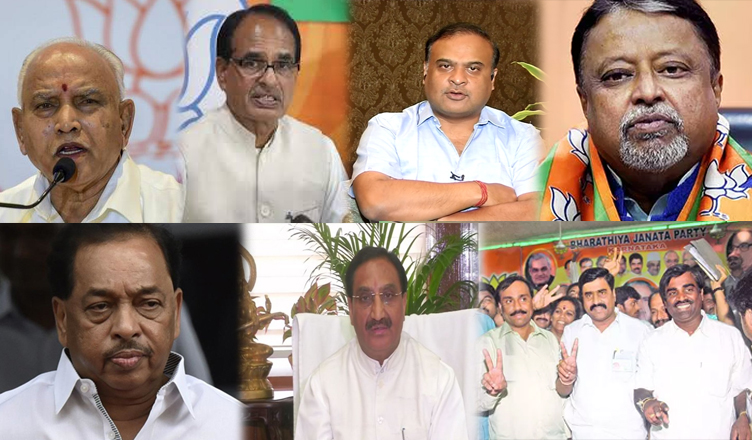 Former Finance Minister and senior Congress leader P. Chidambaram was arrested by the Central Bureau of Investigation (CBI) on Wednesday in an alleged corruption case.

If this, as claimed by the Narendra Modi government, is a fight against corruption, it should have instructed the investigating agencies to probe BJP leaders accused of corruption.

This selective nature of fighting corruption and pursuing justice seems nothing but like a witch-hunt.

Have a look at the names of the politicians mentioned below, who have been accused of corruption and yet the investigating agencies have been soft on them:

Despite being accused in land and mining scams, Yeddyurappa has once again become the Chief Minister of Karnataka. What more? He has been acquitted of most of the charges. The Central Bureau of Investigation (CBI) could not find enough evidence against him after the Modi government came to power. This is the same agency which investigated Yeddyurappa for years.

Former Maharashtra Chief Minister Rane has been accused of money laundering and land scams but he was welcomed to join the Bharatiya Janata Party (BJP) and even made a Rajya Sabha MP. Guess what? We don’t see investigating agencies probing him or raiding his properties.

Former Trinamool Congress (TMC) leader Mukul Roy, who is an accused in the Narada ‘sting’ case and Saradha chit fund scam, was welcomed into the BJP with open hands. The investigation seems to be moving slow since the time he has joined the saffron party.

In 2017, then-Madhya Pradesh Chief Minister Shivraj Singh Chouhan was given a clean chit in the Vyapam scam by the CBI. This is when the case has seen as many as 40 (as suggested by media reports) witnesses and whistleblowers dying under mysterious circumstances.

When Pokhriyal was Uttarakhand Chief Minister, he was accused of being involved in scams regarding land and hydro-electric projects. Instead of getting him investigated, he has been given the portfolio of Human Resources Development (HRD).

While accusing Sarma of being the “key suspect” in the water supply scam in Guwahati when he was a Congress member to inducting him into the party, the BJP has really made some contrasting decisions. The investigations by the Assam government have slowed down, let alone following up BJP’s old demand of handing over the case to the CBI.

Right before the 2018 Karnataka elections, the investigations into mining scams worth Rs 16,500 crore against the Bellary brothers were concluded by the CBI without even reaching the cases’ conclusion. The Bellary brothers were allowed to go scot-free. In August itself, a forest officer who was the whistleblower in the case was sacked by the Modi government.