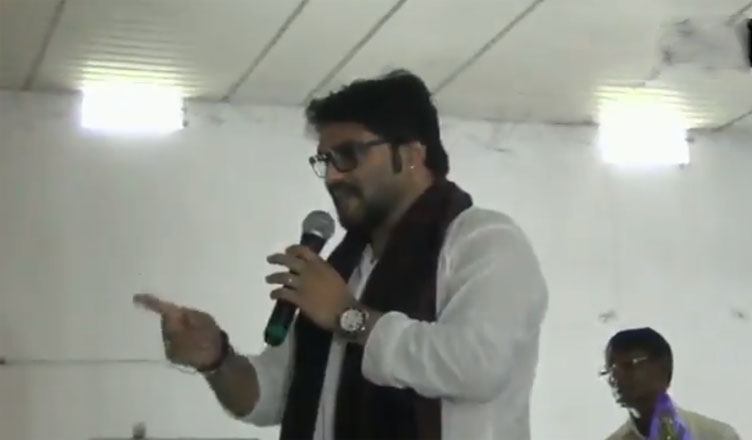 In what may be termed as shocking and insensitive, Union Minister Babul Supriyo threatened to break a man’s leg at an event for the differently abled in West Bengal’s Asansol on Tuesday.

Speaking at the function organised for donating wheelchairs and other equipments for the differently abled, Supriyo said, “What happened to you? Any problem? I can break one of your legs and then give you a crutch.”

He then asked the man, who had apparently distracted him, to sit down. “Why are you moving? Please sit down. Come stand here,” he said.

“Next time if he moves from there then remove one of your legs and I will give these people sticks to beat you up. Have you understood? Now clap for this man,” he added.

Listen to his threat here:

What happened to you? Any problem? I can break one of your legs: Union Minister Babul Supriyo to a man during a program for differently abled people at Nazrul Manch in Asansol #WestBengal pic.twitter.com/cFxpF7K6Pn

A Times Now reporter said, “A man was walking from one side of the stage to the other side. He might have distracted the Union Minister and that’s when the Union Minister really made that threat which was caught on camera… It was very unfortunate because it was a specially abled event and he was literally seen mocking them by saying I will break your leg and then give you wheelchair and then he even goes on to tell his security that if this man is seen standing again, break his leg and give him a pair of crutches. Extremely, extremely unfortunate statement coming from Union Minister Babul Supriyo at a government event where he had gone as the chief guest to distribute wheelchairs to the specially-abled.”

However, Supriyo tried to justify his insensitive statement by terming it as a joke.

“Arrey My Dear Friend’s from @TimesNow , This was meant to be an absolute joke Come on, there must be better ‘Breaking News’ material for today,” he wrote in a tweet.

However, this is not the first time that Babul Supriyo has come up with such a statement.

Earlier in March, on a visit to Asansol, he hit out at the agitating crowd and said he would skin them alive.