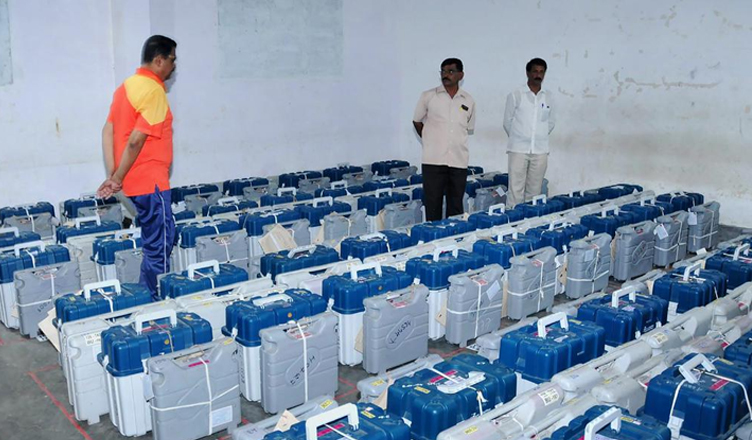 After Congress raised complaint with the Election Commission of India (ECI) about EVM malfunctioning in Madhya Pradesh and Chhattisgarh, the poll body has admitted that there was a blackout in a strongroom in Bhopal on November 30 (Friday).

“A report obtained from the Bhopal Collector states that CCTV cameras and an LED display installed outside the strongroom did not function from 8.19 am to 9.35 am on November 30 due to the failure of electricity supply. Because of this, the recording could not be done during the given time period. An additional LED screen, an inverter and a generator have been installed in order to ensure continuous electricity supply,” the ECI said in a statement.

The Congress and Aam Aadmi Party (AAP) fear that EVMs might be tampered. due to which they had been patrolling the strongroom in Old Bhopal jail since Friday. Congress’ Madhya Pradesh unit President Kamal Nath has appealed party candidates to monitor the EVMs till December 11 (the day of results).

While alleging that there is an organised attempt by the Bharatiya Janata Party (BJP) to subvert the mandate of people, the Congress on Saturday said that faulty Electronic Voting Machine (EVMs) seem to be far more in abundance in areas where the grand old party is believed to be doing very well.

Also read: Congress alleges EVM tampering in those poll-bound states where its chances are strong

“There are serious aberrations post the elections which point to a very desperate attempt by the BJP to try and subvert the process of democracy. the BJP knows that the defeat is staring in the face and therefore what we’ve brought to the attention of the EC is that faulty EVMs seem to be far more in abundance in areas where the Congress party is believed to be doing very well,” Congress spokesperson Manish Tewari said while addressing a press conference.

Quoting various instances where the EVMs were found at suspicious places instead of the place they were supposed to be kept after the elections, the party also showed videos supporting their claims.”