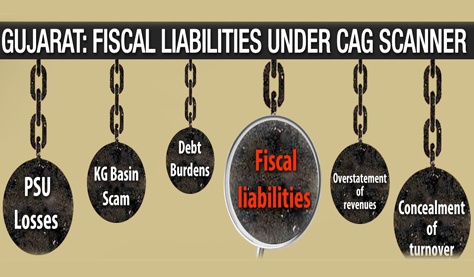 As the Gujarat elections are nearing, it is essential to bring out the truth about the BJP’s misdeeds.

It is our duty to remind the people in Gujarat about the observations of the Comptroller and Auditor General of India (CAG) about the “Gujarat model”.

The CAG slammed the Gujarat Government in its five different audit reports for the year ended March 2013, for severe mismanagement of the state’s financial resources.

The CAG raised doubts about the Gujarat government’s claim of Rs 5,570 crore revenue surplus during 2012-13, describing it as overstated.

The auditing watchdog pointed out that the State’s fiscal liability (or debt burden) which was around Rs 50,000 crore during the BJP-ruled Keshubhai Patel regime rose astronomically after the Narendra Modi government took charge.

The report also rebuked the state government of Gujarat for incorrect computation, concealment, and suppression of turnover worth Rs 5,411 crore over the period of 2009-2014.

While pointing towards the massive losses in public sector enterprises, the audit watchdog reported losses of over 19,000 crores by the most recent year.

According to the competent auditing authority, the Gujarat Urja Vikas Nigam Ltd (GUVNL) did not fix delivery points after the finalization of power purchase agreement, resulting in “undue benefit of Rs 587.50 crore to Essar Power Gujarat Ltd.”

Further, the CAG said that the non-monitoring “of the construction quay in phase 1 of Adani Group-owned Mundra port led to the short recovery of Rs 118.12 crore.”

While a handful made fortunes out of the deeply flawed Gujarat model, lakhs others were left untouched by it.

This time, Gujarat will see a new beginning by punishing the BJP for its misdeeds.