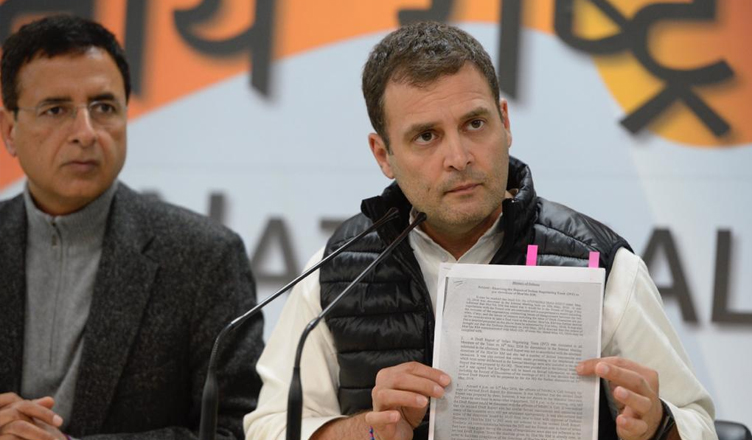 After the Comptroller and Auditor General (CAG)of India report was tabled in Rajya Sabha on Wednesday, Congress president Rahul Gandhi said that it has been proven that the new Rafale deal was signed only to give ₹30,000Cr to Anil Ambani.

The government had also stated that they have ensured quick availability of Rafale jets in order to meet the IAF’s needs. However, the report has revealed that there is an improvement of only one month when compared to the previous UPA deal.

“Here stand demolished, the 2 pillars on which the entire government’s argument for the new deal are based. The only reason for the new deal is to give ₹30,000Cr to Anil Ambani,” Gandhi said while addressing a press conference yesterday.

“If there is no scam in the Rafale deal, then agree for a Joint Parliamentary Committee (JPC). Why is BJP fearing JPC?,” Gandhi added reiterating his party’s demand for a JPC into the same.

The CAG report, which was tabled in Parliament yesterday, also stated the drawbacks of not having a bank/sovereign guarantee and instead settling for a ‘Letter of Comfort.’

In fact, the Ministry of Law had emphasised on sovereign guarantee but the Cabinet Committee on Security headed by Prime Minister Narendra Modi decided to ignore the suggestion.

“A Bank Guarantee gets directly and automatically invoked in case of breach of contract by the seller. In the 2015 offer the French vendor did not furnish any Financial and Performance Bank Guarantees. The Government of France and Vendor neither agreed to furnish the bank guarantees nor Government/Sovereign guarantee. Instead it provided a ‘Letter of Comfort’ signed by the French Prime Minister in lieu of the Bank Guarantee,” the CAG report said.

The Congress also pointed out towards the dissent note written by the three members of the negotiating team.

“Did Supreme Court have access to the dissent recorded by 3 negotiators from the Negotiating Team? This is a government paper. India’s youth have realised that Narendra Modi has betrayed them,” Gandhi said.

One thought on “CAG report proves new Rafale deal was signed to give ₹30,000Cr to Anil Ambani: Rahul Gandhi”