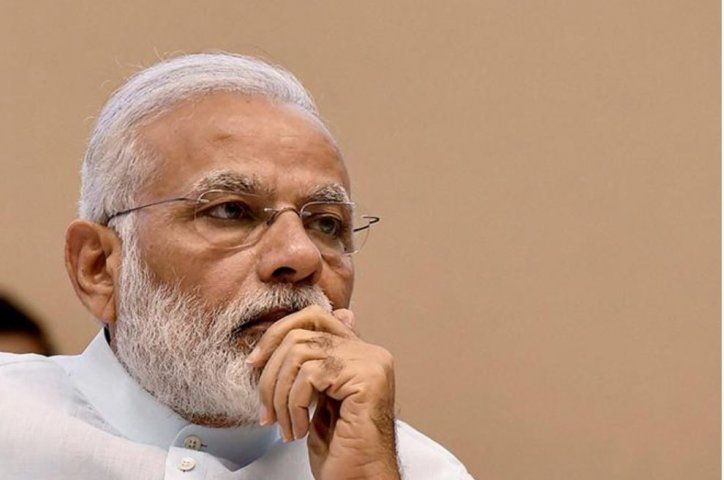 In today’s time, when independent journalism is seen to be undermined by a combination of forces and the voice of the press is muzzled, we have a few courageous people who are ready to be critical of the government and bring to your attention what is true.

With the aim of showing facts and the news as is, a website www.modilies.in has been launched. The website can be termed as a repository of Prime Minister Narendra Modi’s lies, or you can say false claims, right from the time he assumed power in May 2014 till date.

The site is divided month-wise, beginning from June 2014 till August 2018 and will keep getting updated as the months pass. Under every month, you will find the number of false claims made by Modi and his government in that particular month. 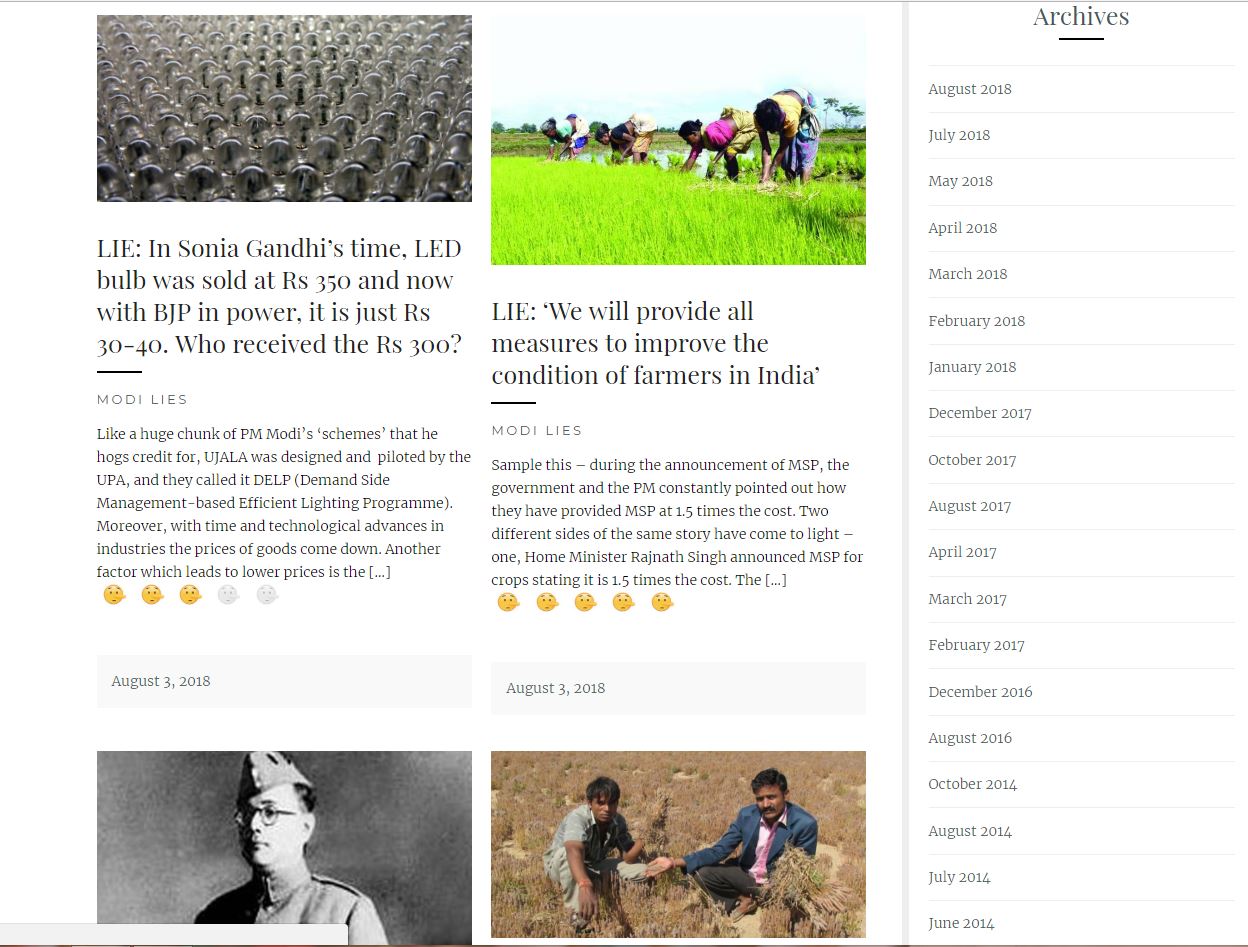 As you can see in the image above, the right side has all the months that the Modi Government has been in the power and as soon as you click on any month, the lies/false claims made during that month open.

You will find numerous fact checks in the form of articles busting the lies of the ruling dispensation. Right from unemployment to farmer suicides, women’s safety to Dalit atrocities, housing to black money, GST to demonetisation, inflation to terrorism, the site talks about all the promises that the Modi government has failed to deliver on.

Not just this, the site also busts various false statements presented by the Modi Government with the intention of distorting History, be it about former Prime Ministers Jawaharlal Nehru and Rajiv Gandhi, Dr. B.R. Ambedkar, freedom fighter Bhagat Singh and many other great Indian personalities.

The claims made by this site are not based on any vague statements but are backed by facts and credible sources. 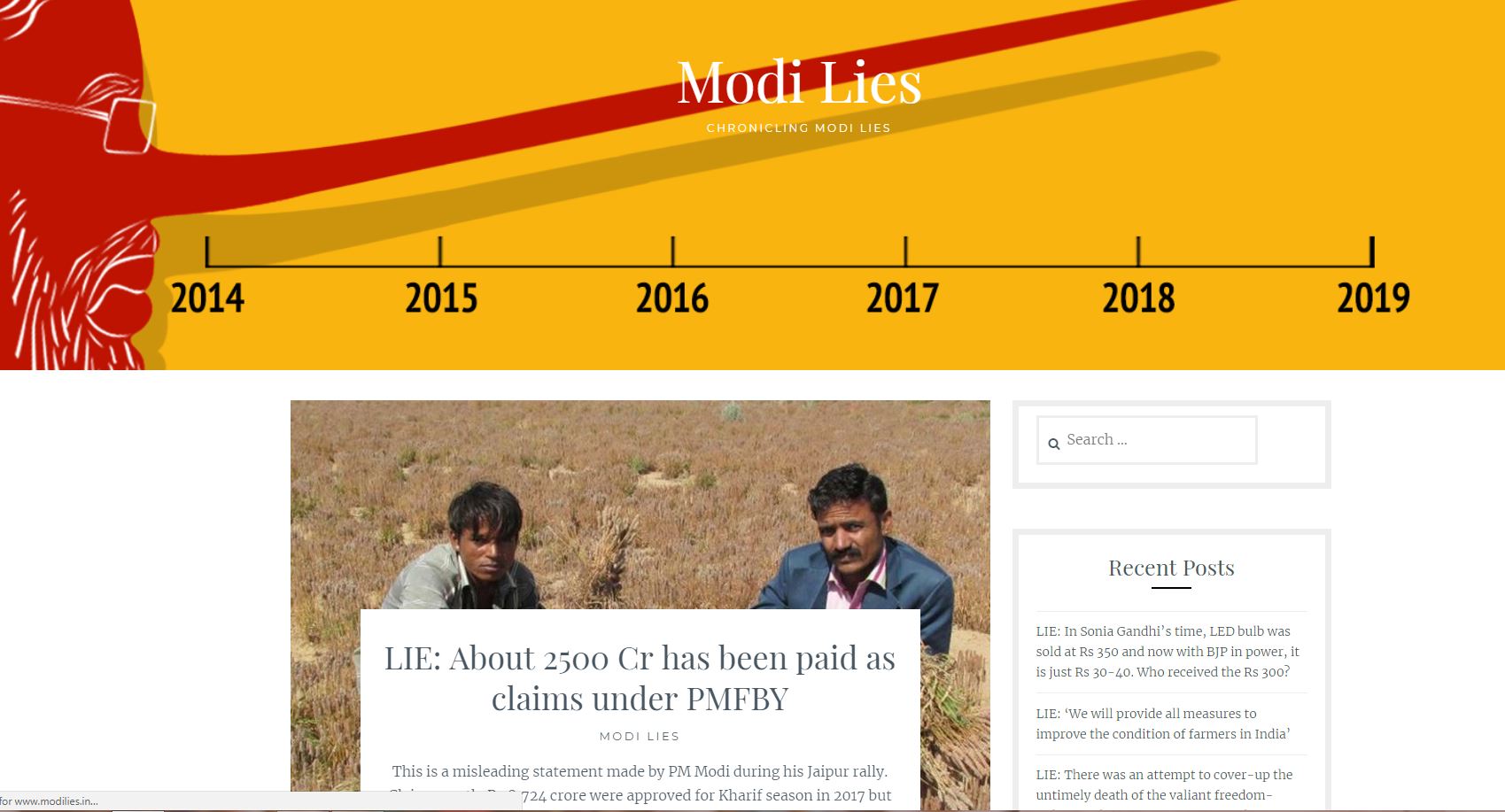 The above image is of how the main page of the modilies website looks like. An interesting analogy between a fictional character Pinochhio and Modi has been drawn. Pinocchio’s nose use to grow big every time he lied. Similarly is the case with our Prime Minister who loves to make false claims.

Well, there are a very few sites which are still running independently, and modilies is another addition on the list.

It’s a website only to remove the veil of lies that the Modi government has covered its failures with. So here’s a shout-out to a site which encourages independent journalism and truth.

You can check out the website by the clicking this link: http://www.modilies.in/