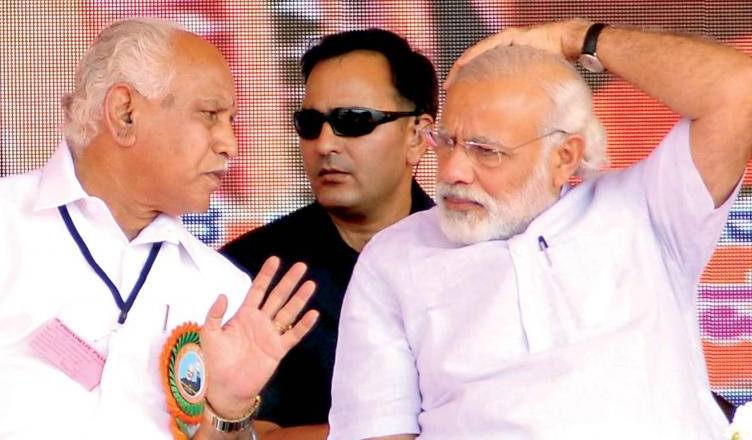 BS Yeddyurappa, BJP’s Chief Ministerial candidate in Karnataka has contradicted Prime Minister Modi. While Mr. Modi has repeatedly said that there has been no work done by Congress CM Siddraimaiah, BS Yeddyurappa said, “We will continue the good schemes of the Congress government.”

Mr. Modi, in his campaign rallies, said that while the country is developing under the BJP, in Karnataka no progress is being made because of the Congress government. He also went on to accuse the Congress of being corrupt and not doing anything for the people.

For the last five years, the Karnataka Government is asleep and because of their inertia the state is suffering. Farmers are in distress, Textile, MSME sectors are not getting support and there is rampant corruption. No wonder people are so keen to reject Congress. @BJP4Karnataka

It appears that there is disunity in the ranks of the BJP in Karnataka because not only has BS Yeddyurappa admitted that the Congress party has done good work, he said that the BJP will continue their schemes but after renaming them. The Congress scheme providing free food to families that are below the poverty line and at subsidised rates to families above the poverty line was called Anna Bhagya, the BJP will name it Anna Dasoha. Yeddyurappa has also decided to continue the Indira canteens but, of course, renamed after some BJP leader.

This is an unsurprising strategy by the BJP, they used a similar one at the center and renamed multiple schemes the UPA government had implemented. Some examples of this are:

These are just some of the schemes renamed by the BJP when they came to power in 2014. Yet they continue to claim that while the Congress was in power they did not work. Imagine if the BJP used their imagination and work hours to actually do some real work instead of just spending their time in office renaming schemes.