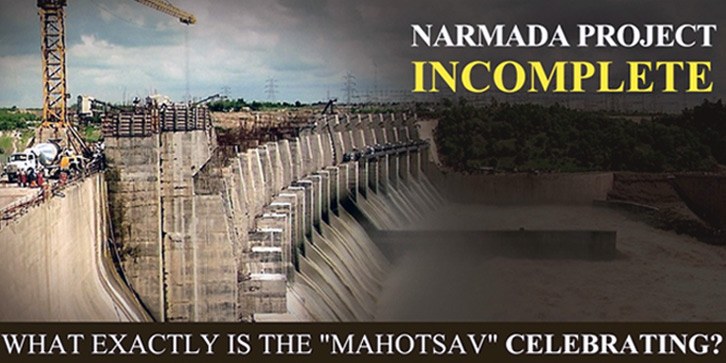 The foundation stone of the project was laid down by former Prime Minister Jawaharlal Nehru in 1961, and later under the leadership of the then Prime Minister Rajiv Gandhi, all stumbling blocks were cleared and 90 percent of the work was given successive nods for completion. After that, although the BJP was in power for nearly 22 years, the construction work remains incomplete till date.

Now, keeping in mind the upcoming elections, BJP has launched another yatra—Narmada Mahotsav Yatra, covering 10, 000 villages in 24 districts. When development fails, it is always identity politics that BJP resorts to.

If we see the facts, they are quite dismal. 43,000 Km of proposed canal networks are not completed. Further, the Narmada Dam project was intended to provide irrigation facilities for nearly 19 lakh hectares of land. But in real terms as far as the project’s status is concerned, it can only irrigate 3.70 lakh hectares of agricultural lands. The dam water has reached less than 12 percent of the total 17.92 lakh hectares of land.

It may be noted that Gujarat state government has also reduced the length of canal network plan—key for agriculture sector—to 71,784 Km from 90,389 Km as originally planned.

In response to questions, the government has said that it will construct 3,856 Km of canal network in 2017-18. At this pace, it will take another eleven years for the project to complete! In addition, the project cost was originally estimated at Rs 9,000 crore, but due to the delay in its completion, it has since swollen up to Rs 56,286 crore.

Gujarat faces various issues related to water availability and problems faced by the agriculture sector. By organising Narmada Mahotsav Yatra, BJP is only trying to move people’s attention away from these problems.