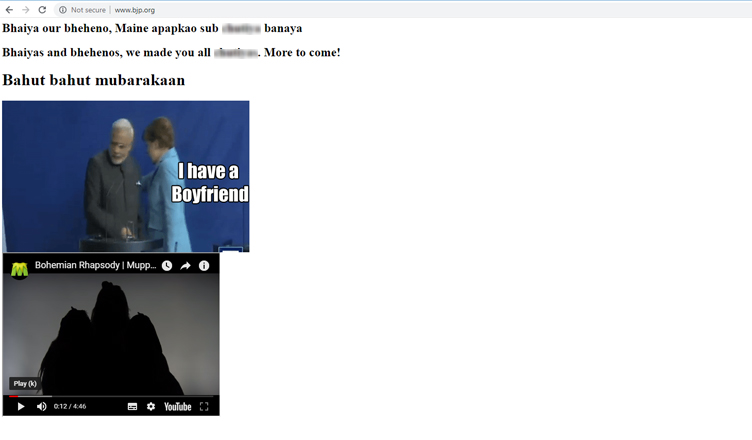 The official website of the Bharatiya Janata Party (BJP) was hacked on Tuesday morning. Nobody has yet claimed the responsibility for the same.

On opening the website, www.bjp.org, a one-line message flashes on the page which says, “Bhaiyas and bhehenos (brothers and sisters), we made you all ******** (fools). More to come!”

It also says, “Bahut bahut mubarakaan (many many congratulations).”

Along with the message, a GIF and a song video has also been posted on the page. The GIF is that of an embarrassed Prime Minister Narendra Modi who was ignored when he tried to shake hands with German Chancellor Angela Merkel.

The video is that of Bohemian Rhapsody’s ‘The Muppets.’

On opening the page now, it shows a message saying ‘Error 522 connection timed out). Clearly, it has come into the BJP’s notice and seems like they are trying to tackle the problem. 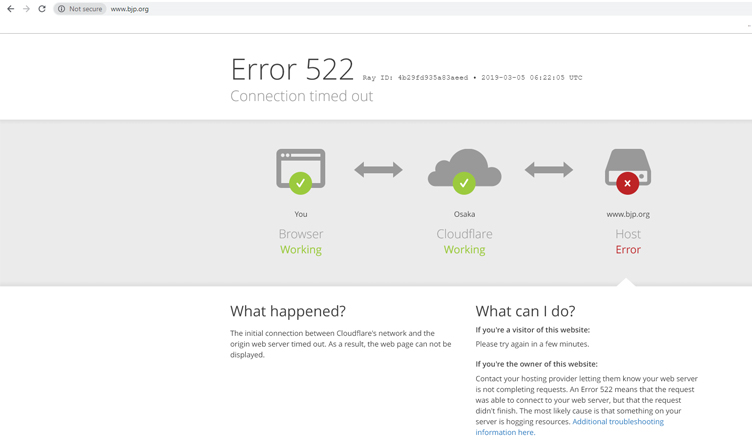 Well, as soon as the news of the BJP website being hacked broke on social media, the Twitterati went into a frenzy with some congratulating the hacker for doing so.

Let’s have a look at some of the tweets:

Apt Message in @BJP4India Website..Worth to watch. If BJP cant protect their website how can they protect conman man. pic.twitter.com/yOGblMFcQk

As per the sources – Nehru and Gandhi decided to hack #BJPWebsite with the help of Patel. ???????

Website of the "world's largest political party" hacked.
Or is it just a candid confession ?#BJP #BhartiyaJanataParty #MeraWebsiteSabseMazboot pic.twitter.com/Qwn2VF7cH8

One thought on “BJP website hacked, Twitterati laughs out loud”