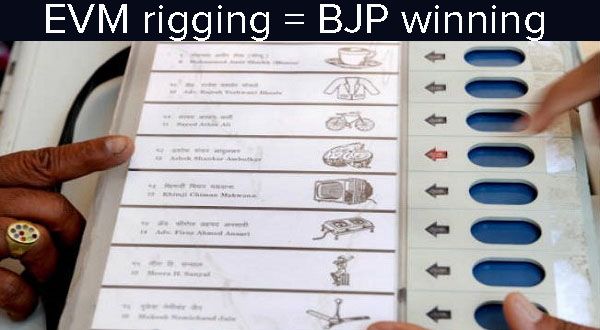 A day after the BJP swept the civic polls in Uttar Pradesh, opposition parties demanded that the future elections be held through ballot papers instead of electronic voting machines (EVMs).

Though the BJP marked victory in the civic polls, but it is known to all how it was attained. The opposition and voters, both have understood that the EVMs only vote for the BJP.

For the same reason, BSP chief Mayawati threw an open challenge to the BJP to hold the 2019 Lok Sabha polls through ballot papers. The Opposition has raised its voice in unison demanding the use of ballot papers for voting.

Many incidents related to EVM rigging were reported from different parts of Uttar Pradesh. One being reported from Meerut, wherein a BSP supporter recorded the incident on his phone showing how once he pressed on the button for the BSP candidate the vote was registered in the account of BJP and NOTA.

It is appalling to see BJP stooping down to a level of using the EC as a mere puppet and destroying its individual identity completely.

Similarly, if one looks at the contrast the BJP has in the number of times it won elections held through ballot paper and through EVMs, the picture of distortion gets clearer.

In the elections held for the post of Mayor, BJP won 14 seats out of 16. Why? Pretty easy, EVMs were used to conduct the elections. On the contrary, BJP secured victory in only 100 out of 437 Nagar Panchayat President seats, the elections for which were held through ballot papers.

No wonders, BJP is fond of rigging and disturbing the normal course of everything which comes in its way.

It goes beyond doubt that the BJP could not have marked such victories without manipulation. And these numbers affirm the same.

Look at the chart below for a clearer understanding:

Shame on BJP to threat the very foundation of democracy and snatch from us our right to choose and vote.

We really wish the BJP could have learnt something from Congress, the party that ruled India for 70 years and still rules the hearts of Indians, but never opted such a way to remain in power.