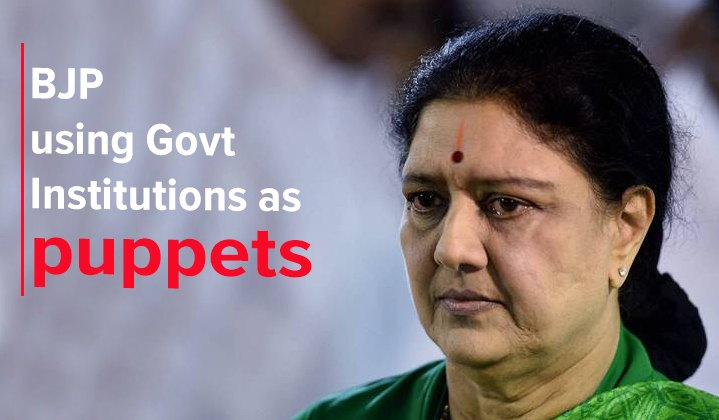 The I.T. Department raided premises associated with AIADMK leader Sasikala and her relatives, less than 48 hours after a prominent AIADMK leader criticised demonetisation.

The army of 1,800 officials raiding 187 premises show the extent to which the BJP can stoop to settle political scores.

Sasikala’s relatives, party colleagues and even erstwhile associates were subjected to the raids.

Searches were conducted at properties of Sasikala’s husband, nephew, niece and daughter-in-law.

TV news channel Jaya TV and newspaper Dr Namadhu MGR were also raided, both of which are critical of the TN government.

There have been accusations that the BJP at the centre has threatened the AIADMK several times through “selective I-T raids” since Jayalalithaa’s death last December, and this raid proves the same yet again.

The raids were conducted a day after the anniversary of demonetisation, and less than 48 hours after AIADMK leader Dhinakaran questioned the reasons as to implementing the needless policy.

Another pertinent point to look at is that the Prime Minister visited the state just three days prior to the raids.

The BJP is continuing down the path of using neutral systems to further its agendas and settle perceived slights. The IT raids can now be seen for what they are. The BJP is using the IT dept to threaten a section of the AIADMK that is not aligned with it.

It clearly shows that the BJP has no respect for the democratic processes of our country.