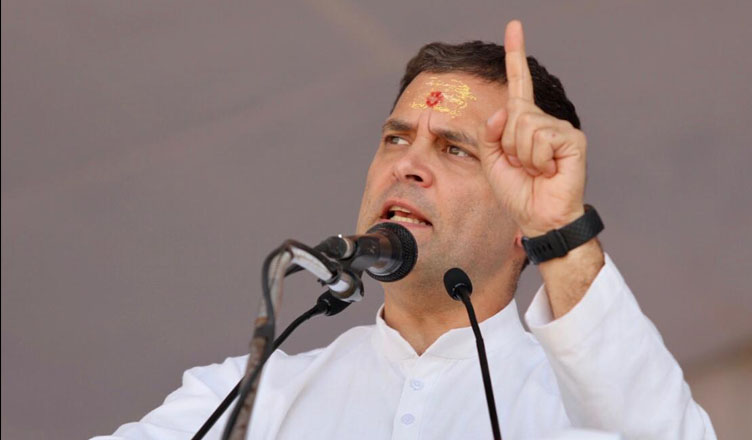 While addressing a public gathering in Madhya Pradesh’s Ujjain, Congress president Rahul Gandhi on Monday said that the Bharatiya Janata Party (BJP) talks about religion but its own religion is corruption.

Giving example of Vyapam scam, Gandhi said 50 people were killed and the education system was destroyed due to the fraud.

He further said that a poor woman was arrested for being unable to pay her electricity bill which amounted to ₹1,00,000. This is when she had not even used a single unit of electricity. She was arrested even when she had no fault of hers. Whereas, no action is taken when people like Vijay Mallya abscond with ₹9,000 crore.

The Congress chief promised to revive the textile industry in the state destroyed by Chief Minister Shivraj Chouhan and which had the capability to compete with Chinese and Bangladeshi industries.

Gandhi then questioned if the Shipra river, on which the government spent ₹400 crore, had been cleaned.

“The question is not about making promises, it’s about sincerity. If you are sincerely about helping the farmers and the youth, then your policies will reflect that,” Gandhi said.

He then lashed out at the government for being unable to create jobs in the state.’

“There is BJP govt in Madhya Pradesh for the last 15 years. How many jobs has CM Shivraj Chouhan created?” Gandhi asked.

The Gandhi scion also raised the issue of One Rank One Pension (OROP) scheme and said that Prime Minister Narendra Modi has only lied about the same throughout.

“What has the BJP done for our Armed Forces? They have burnt down the state of Jammu & Kashmir and has opened the doors to terrorists. Ex-servicemen admitted to me that Mr. Modi lied to people about OROP,” he added.

“PM Modi bypassed UPA govt’s conditions in Rafale deal, where the deal was to be given to HAL. Anil Ambani accompanied Mr. Modi in his delegation to France and scored the deal for himself. ₹526Cr/aircraft was hiked to ₹1600Cr. By giving the Rafale deal to Anil Ambani, Mr. Modi has stolen the employment opportunities from Madhya Pradesh’s youth,” he said.

Earlier in the day, Gandhi paid visit to the Mahakaleshwar Temple in the state.