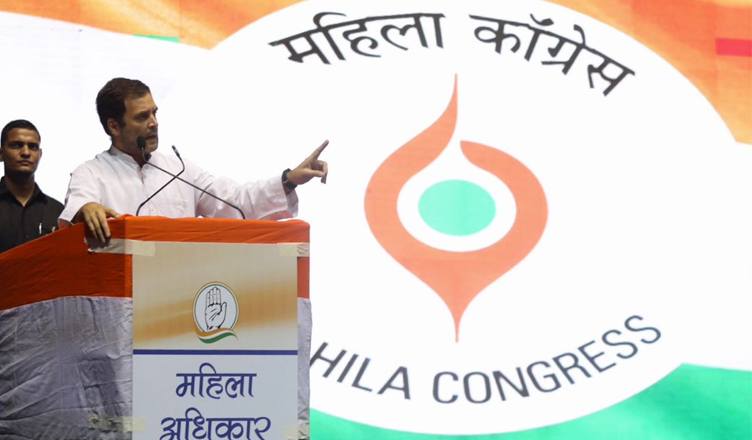 Congress President Rahul Gandhi on Tuesday targetted the male chauvinistic Rashtriya Swayamsevak Sangh (RSS) and said that the right-wing organisation and the Bharatiya Janata Party (BJP) do not believe that women can lead India.

“There is a huge difference between BJP-RSS’ ideology and ours. The biggest difference is between our and their vision for women. The doors of their remote control organisation, RSS, are closed for women. Not even one women can join that organisation, let alone 50 per cent. For BJP-RSS, only men can lead India, not women. A woman’s place is at the back whereas a man’s place is at the forefront,” Gandhi said while addressing the Mahila Adhika Sammelan organised by Mahila Congress.

At the same time, the Congress Chief highlighted his party’s vision and the contribution they want to make towards women empowerment.

“We’ve seen the work done by women Chief Ministers like Sheila Dikshit, who transformed Delhi. We need women at every level of leadership within and outside the Congress Party. I want to state it clearly that our goal is to have 50% women in the Congress party,” he said.

Hitting out at Prime Minister Narendra Modi, the Gandhi scion said that the former is seen speaking on everything but when it comes to speaking on violence against women, he stays silent.

“In Uttar Pradesh and other BJP-ruled states, when crimes are committed against women, PM Modi stays silent. No action is taken against the accused if he is a member of their party,” Gandhi said.

He further said that lakhs of women benefitted from the MNREGA scheme, but PM Modi mocked the scheme in Parliament.

“Some women will be talented at being a spokesperson, and some in policy-making, some in electoral politics. I want you to give me a list of such women & I will make sure they are given a chance and position in the party,” he said.

He appealed to Mahila Congress to let him know the names of deserving women and he will ensure that they are given a chance in the party.

“Some women will be talented at being a spokesperson, and some in policy-making, some in electoral politics. I want you to give me a list of such women & I will make sure they are given a chance and position in the party,” Gandhi said.

“My job is to ensure more women come to the fore in every Pradesh Congress Committee and at every level,” he added.

Gandhi further said that the democratic institutions of the country are under attack by the RSS and the BJP and it is the duty of the Congress Party, and particularly women in the party, to defend these institutions.

“I’m very happy to say, that Congress party and other opposition parties are working together to defeat BJP,” he said.