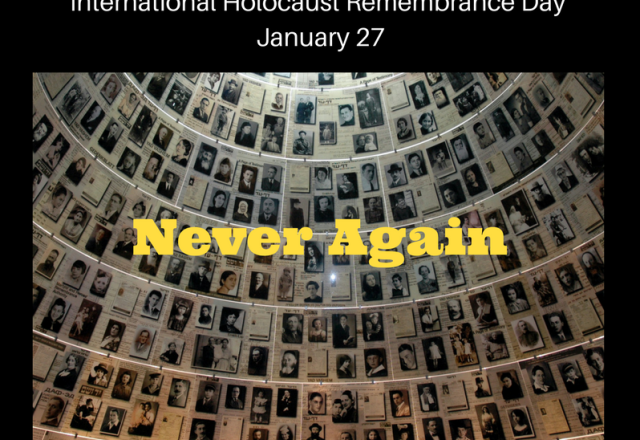 To commemorate the liberation of the Auschwitz-Birkenau concentration camps, the United Nations declared the 27th of January to be the International Day of Commemoration in memory of the victims of the Holocaust. The holocaust is perhaps the darkest period of human history and certainly the most traumatic event in the immediate collective consciousness of humanity. The thought that such atrocities could be committed by fellow human beings, seemingly normal people, with loving and caring families is something we are yet to comprehend. The holocaust prompted conscience-stricken people across the world to say, ‘Never Again!’, as an affirmation that such horrors should never be repeated anywhere across the world.

It should however be remembered that the holocaust didn’t happen overnight. It was not the result and decision of one man or one group. It rather was a dark crescendo that built up, founded on human prejudice and hatred for those who don’t belong to the majority group of a society. In fact, the UN Secretary-General António Guterres opines that “It would be a dangerous error to think of the Holocaust as simply the result of the insanity of a group of criminal Nazis. On the contrary, the Holocaust was the culmination of millennia of hatred; scapegoating and discrimination targeting the Jews, what we now call anti-Semitism”.

The genesis of hatred was chronicled well in David Boder’s interviews of holocaust survivors in 1946. His work reveals that a strong sense of identity is created, and fear psychosis is induced amongst the minorities, in this case the Jews. However, the world we live in today is reminiscent of the 1930, a decade of decadence where naked prejudice was not only ignored, but also openly practiced. Today we are still confined by our identities and prejudices that are being deepened. Across the USA and Europe, the rise of anti-Semitism is being witnessed by the people, where toxic rhetoric is becoming an everyday occurrence. Unfortunately, the rise of the decadent demagogues isn’t restricted to the West.

In India too, minorities, particularly the Muslims have been targeted by the far right. Several people have openly called for the Muslims to be ‘taught a lesson’ while frequently speaking with impunity in language that dehumanizes them. The ruling BJP not only turns a blind eye, but is tacit in promoting such divisions in society. That the BJP has come up with the CAA, which brazenly excludes Muslims from seeking citizenship on the grounds of religious persecution, reveals the party’s true intentions. Though the BJP claims that the CAA is meant to assure persecuted people a secure and peaceful future in India, people are afraid that when the CAA is taken in conjunction with the NRC millions of Muslims will be rendered stateless.

In fact, many people are comparing the CAA and NRC with the Nuremberg Laws, through which Hitler stripped Jews of their citizenship. Once they were made stateless, the minorities were sent to detention centers—which eventually became the infamous concentration camps. It is a moment of déjà vu for the world, as the BJP government has already begun constructing and running detention centers. The government has not explained what it plans to do with people who have not been/will not be able to prove their citizenship. Will they all languish in the detention centers? Will the Nazi diabolical experiment repeat itself once again? Will the BJP government result in an indelible blemish on our collective conscience? Will we as a nation recover from these dreadful times reaffirming to ourselves that we shall not allow the forces of fascism to rise once again? And will posterity have to say “Never Again … once again’?