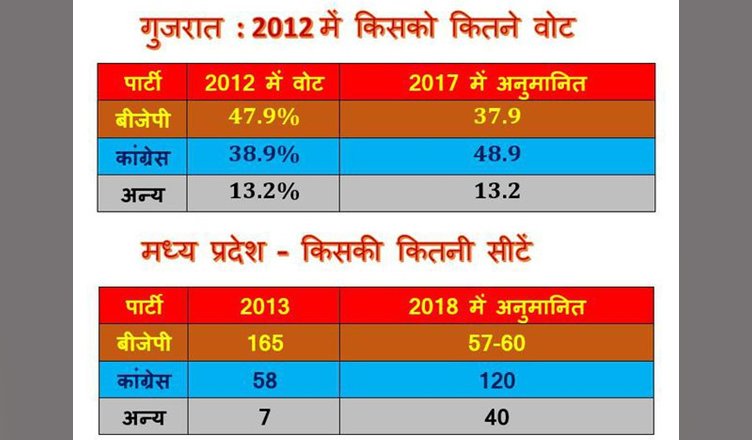 It is clear from the results of the RSS survey that BJP is going to lose in this year’s Gujarat Assembly elections and in Madhya Pradesh elections next year.

In Gujarat and Madhya Pradesh, BJP’s ‘bure din’ have begun. In the coming assembly elections, BJP is likely to be wiped out in both the states and is likely to get less than 100 seats. The survey shows that in Madhya Pradesh, Congress can get 120 or more seats, while there will be barely 57-60 seats in BJP’s account.

In Gujarat also, the RSS survey estimates that the BJP will have to bear a loss of at least 10 percent of the votes. According to the survey, the Congress is seen in a very strong position in Gujarat. A report has been submitted to the Prime Minister and the BJP President.

This revelation has given Modi and Amit Shah their worst nightmare. The results of the survey clearly show that in Gujarat, BJP will lose 8 to 10 percent of the votes. In the survey, the reasons for this decline have been seen as the change in the reservation process and the anger of the backward class. On the other hand, the vote bank of Kunabi Patidar Samaj is also seen slipping from the BJP with the death of 14 youths in Patidar Anamat movement.

The social-political situation that Gujarat is facing, as shown in the survey, indicates that the BJP president and the Prime Minister may have a headache in their own home state. In the social equation of Gujarat, the population of Koli fisherman community is 24.22 percent and tribal castes are 17.61 percent and Patel Kunabi Patidar is 12.16 percent. The Dalits have a very small population of 7.17 percent in Gujarat as compared to other states, while Muslims are 8.53 percent. 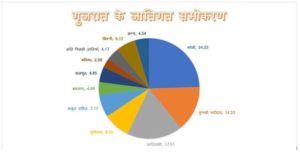 Talking about the political geography of Gujarat, Koli Fisherman and Kunabi Patidar (Leuva Patels) have a very strong base in Western Gujarat (Saurashtra-Kutch) and Leuva Patels dominate 36 seats out of 58 seats in Saurashtra and Kutch while on the other hand, Koli Fisherman’s population is proved to be crucial for the Saurashtra’s 46 seats and Southern Gujarat’s 13 seats. The population of the Kolis is approximately 50 percent in 24 and 13 seats of Saurashtra and Southern Gujarat respectively.

‘Cheating on the President’s Caste’

The BJP is probably already aware of its position in Gujarat, that is why, when Ramnath Kovind, of Kori caste, was made the President, he was promoted as a Koli. Lataan Ram Nishad, a social justice thinker and a leader of fishermen on this subject, says, “It is a big fraud to promote Ramnath Kovind as a Koli. This is a part of BJP’s lies and deceit politics, because Kori and Koli are two different castes.”

In Gujarat, the Koli community is almost double the number of Kunbi Patidar but Patel has become politically more aware and powerful. There has been awareness among Koli fishermen in Saurashtra and Kutch, but southern, central and northern Gujarat lack influential Koli leaders. Purushottam Bhai Solanki is a very strong and influential leader, but limiting his stature is leading to resentment in the Koli society. Solanki was sworn in as Minister of State with Narendra Modi in 2001 and he is also the Minister of State in Vijay Rupani’s cabinet today.

On the other hand, Brahmin and Baniya coalition dominated the elite ruling class of Congress. There was a very easy division of agricultural land in the state. And over time, Patidar cultivators went on to join the elite ruling class of the Congress. From 1908, Congress independence struggle fighter Kunwarji Mehta started organising Patidars. Kunabi is the only Patidar in northern Gujarat and Saurashtra. Patidars can be divided into Leva, Kadua, Anjana, Leuva and Moti.

Koli fisherman has the highest figure in terms of population. The number of fishery castes, including Koli, is 29.84 percent. Koli prefers to be known as Kshatriya in Central and North Gujarat and Patel in southern Gujarat.

Defeat in Madhya Pradesh is inevitable

In Madhya Pradesh also, there is a high probability of BJP suffering a huge loss. According to the RSS survey, the killing of Dalits in Una in Madhya Pradesh is sure to cause significant damage to the BJP. The result of the survey of the Sangh clearly shows that the BJP will not be able to retain even half of the seats that it got in 2012. While the Congress is projected to get more than 120 seats in this survey, it is estimated that the BJP will get 57-60 seats.

However, Amit Shah talked about a target of ‘160 plus’ in the three-day tour of Madhya Pradesh. Later, state Chief Minister Shivraj Singh Chauhan said that the BJP would win ‘200 plus’ seats in the forthcoming assembly elections. There are 230 seats in the Madhya Pradesh Legislative Assembly and 116 seats will be required by the BJP to return to power. But in the RSS internal survey, there seem to be obstacles in BJP’s path.

According to the RSS survey, there are signs of BJP getting less than 100 seats. If the synergy between the big leaders of the Congress remains, then the BJP is destined to lose. Along with the Vyapam scam, the BJP’s image has been tarnished by the ‘sex scandal’ of many BJP leaders. Also, the farmers’ agitation and the death of six farmers, the suicide of 50 farmers, imprisoning Narmada Bachao Andolan’s leader Medha Patkar has also added to it. All this has blocked the way of victory for the BJP.

There is also the possibility that BJP leadership can fight the next election without projecting Shivraj Singh Chouhan as the Chief Ministerial candidate.