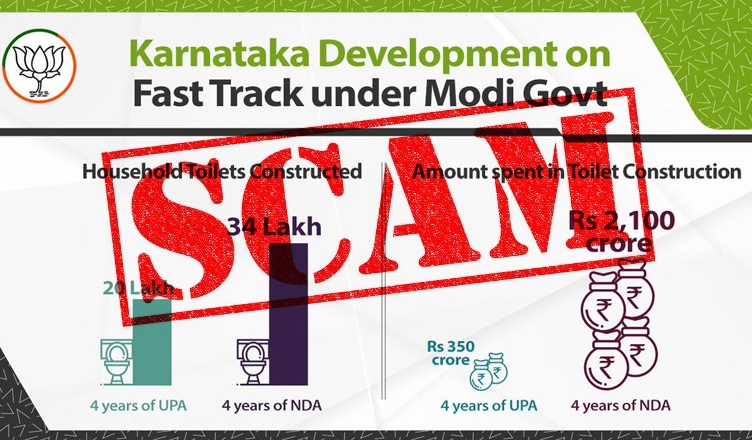 It all started when the Bharatiya Janata Party (BJP), in a bid to show its efficiency in dealing with funds, posted a photo showing more number of toilets built by it than the UPA in four years. What the BJP didn’t realise was the part which clearly showed that the UPA built toilets at a fraction of cost than the NDA government.

In a way, BJP’s advertisement turned out to be an advertisement for the previous UPA government, showing how cost-effective it was in constructing toilets and built them at a fraction of cost than used by the NDA government. Congress was quick enough to point out the same. It drew comparison between its regime and the current one and showed the huge difference between the costs of toilets built by both the governments.

Even the Aam Aadmi Party (AAP) joined the league and mocked the BJP, asking if the excess money was used in making the recently-inaugurated BJP headquarter.b

Where the rest of money gone?
In making headquarter of @BJP4India? https://t.co/IaArCZeDh7

Even others seemed to be on the Congress’ side and took no time in making fun of the saffron party.

One of the Twitter users tweeted, “Cost of construction Under UPA: ₹1750 per toilet, Under NDA: ₹6176.47 per toilet. Can BJP share this technology of low cost toilet construction? Or is the calculation done based on Vedic Mathematics?” Another wrote, “Ahahahaha. BJP officially admitting to huge levels of scam OR inefficiency through this graphic. Cost of per toilet went up ~ 4 times! #VedicMathsZindabaad”.

Looks like, BJP’s PR blooper also led to the exposure of its toilet scam, leading to a major embarrassment for the party. This is also a major revelation, especially considering the Karnataka elections just round the corner.

One thought on “BJP exposes its own toilet scam”