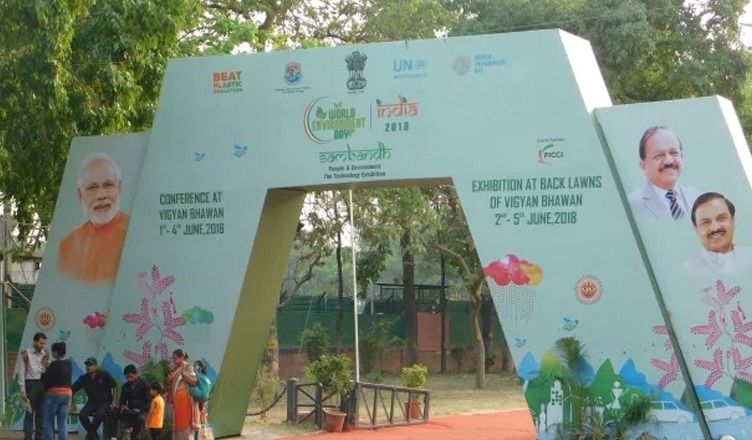 In much the same way as the BJP conducts most of its publicity stunts, the one organised to highlight the environmental protection measures taken by the government in the last four years was terrible for the environment. The 3-day exhibition fro the 2nd to 5th of June at the India Gate Lawns did not even follow the guidelines of the pollution board.

The structure erected for the exhibition was made from flex-sheets, the parking area was dusty without any grass patches. As vehicles moved in the area dust was blown into the air. National Green Tribunal prescribes water to be sprinkled in the area to reduce dust but this was not followed. A large area just beyond the parking was full of dried leaves and plastic. Clearly, this is their way of dealing with plastic waste.

The Central Pollution Control Board (CPCB) guidelines say that air quality instruments should be placed at a height of over one meter, yet the one at this event (set up by the CPCB themselves) was on the ground. Te silent diesel generator sets were so loud they could be heard across the road violating the noise norms.

PM Modi’s speech was about the government’s measures to curb environmental degradation. He talked about the Namami Gange project that has resulted in a clean Ganga, which is surprising because it remains as polluted as ever and is now also running dry. He talked about the increase in forest area yet he has reduced the radius for industries to set up near national reserves from the earlier 10 kilometers to 100 meters.

Mr. Modi claims to want to benefit the environment, yet he has gone on record to say that there is no climate change. The policies of the BJP have decreased environmental protection norms set by the previous government to benefit industrialists. But when has no work or bad work ever stopped Mr. Modi or the BJP from claiming that they have performed better than anyone ever before in the history of the country?