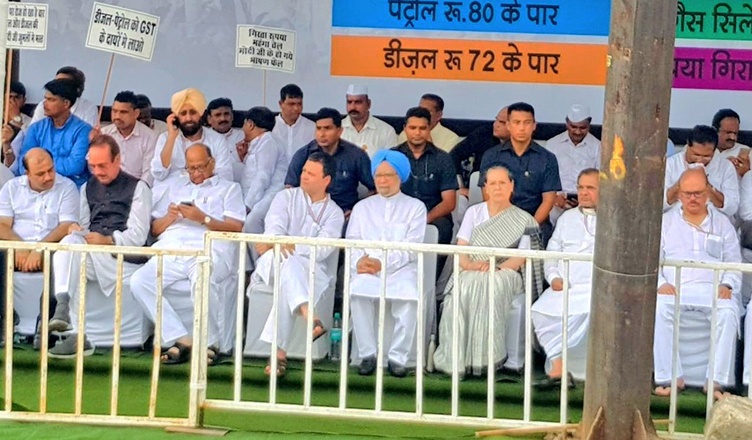 As many as 21 opposition parties have come together and have extended their support for ‘Bharat Bandh’.

Updates from across the country:

In Patna, aggressive bandh was observed. Schools have been closed in Patna. The protesters were seen blocking movement of trains at several places in Bihar. Even highways have been blocked.

In Mumbai, a Rail Rako-kind of protest was seen, where in protesters blocked the movement of trains.

Life has been paralysed in Kerala’s capital, Thiruvananthapuram. Transport is absolutely off the road, with the State-owned KSRTC and the private stage carriers not plying and taxis and autos off the road.

Even shops, schools are closed.

Bengaluru is witnessing a peaceful protest with schools, banks and government offices closed.

On the other hand, Puducherry is witnessing a violent protest. Protesters pelted stones on a TNSTC bus near Nellithope signal.

“Steep rise in prices of petrol and diesel fleecing common people Effect led price rise and inflation why people in power silent 11 lakh crore collected for last four years Where it is. Loot and daylight robbery. Time is not far of to throw away NDA govt,” Chief Minister V. Naravanaswamy tweeted.

In Odisha, Congress leaders resorted to ‘Gandhigiri’ by offering flowers and requesting the public to support the bandh.

In Gujarat, Congress workers blocked several highways. Schools were forced to shut down in Allahabad. More than 150 routes of state transport buses are closed in the state.

Earlier in the day, Congress kickstarted the protest from Rajghat, the memorial of Mahatma Gandhi.

Congress President Rahul Gandhi paid tributes to the father of the nation before the protest. He also offered water collected during his Kailash Manasarovar yatra.

Following this, UPA chairperson Sonia Gandhi along with other Congress leaders sat on a dharna at Rajghat.

Former Prime Minister Manmohan Singh asked a united Opposition to keep aside their differences and work together to fight the Bharatiya Janata Party government, which has ‘failed to fulfil promises’.

Singh, along with Sonia Gandhi joined Rahul Gandhi and others Congress leaders at Ramlila Maidan as Opposition observes Bharat Bandh.

Samajwadi Party, Dravida Munnetra Kazhagam (DMK) and Nationalist Congress Party (NCP) are the other opposition parties which have extended their support to Congress’ call of Bharat Bandh.

“DMK will extend complete support to the Bharat Bandh call by the Indian National Congress protesting against the BJP government for steep rise in prices of petrol-diesel. I urge the people and party cadres to make the bandh on 10th Sept a big success #FuelPriceHike @RahulGandhi,” he tweeted.