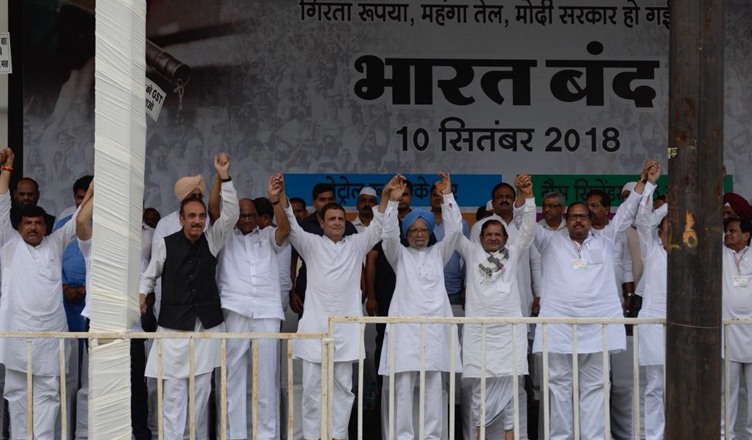 Congress President Rahul Gandhi on Monday asserted confidence and said that together with other opposition parties, they will defeat the Bharatiya Janata Party (BJP) in the 2019 Lok Sabha elections.

“Narendra Modi used to roam the country and said, look prices of fuel are rising. Today he is the Prime Minister and says nothing. A gas Cylinder that used to cost ₹400 is now ₹800. The price of petrol is above ₹80 and that of petrol a little lesser than ₹80,” Gandhi said while protesting at New Delhi’s Ramlila Maidan during the protest termed as ‘Bharat Bandh’ by the party.

The Congress Chief further said that the Rupee has never been weaker than this in the 70 years of Independence.

Gandhi further said that the Modi government has failed to deliver all the promises they had made.

“In 2014, Narendra Mod became the PM. He made several promises to the people of India, to the youth of India, to the farmers of India. 2 crore jobs were promised, safety of farmers was promised, women safety was promised. Wherever he went, he made some promise. In 2014, many people believed in him and voted for him. It’s been four years and the country can see it crystal clear what the BJP government has done,” he said.

The Gandhi scion then launched an attack at the Centre with regard to Demonetisation and the Goods and Services Tax (GST).

“The PM, by implementing Demonetisation, has destroyed small businesses and small traders. Till date, he has not been able to explain why he implemented demonetisation,” Gandhi said.

“It was believed that India would get a single tax. But five different taxes were put on people under the name of GST. Ask any small shopkeeper how much money has the GST extracted from him,” he added.

Gandhi then raised the issue of what they term as the ‘Great Rafale Robbery’ and said that the money robbed due to Rafale deal belongs to the farmers and youth of the country.

“The ₹45,000 crore that Narendra Modi has given to his friend, does not belong to him, but to the youth and farmers of this country. Your money has been snatched from you,” he said.

“Farmers, labourers see no light at the end of the tunnel. Only 15-20 big industrialists are prospering,” he added.

Rahul Gandhi said that he and his par can feel the pain of the people.

“We can feel the sadness that is there among the people of the nation. But, Narendra Modi and BJP leaders cannot feel that sadness,” he said.

“Together, all of us are going to defeat the BJP,” Gandhi said while concluding.