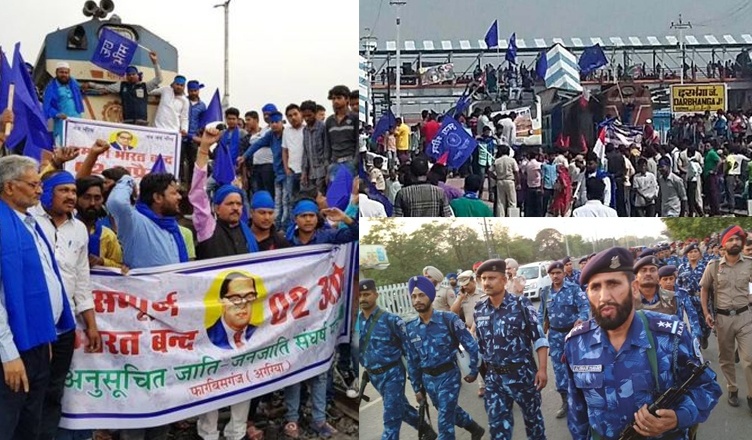 Dalit organisations on Monday called for a nationwide strike (Bharat Bandh) to protest the alleged dilution of SC/ST Act proposed by the Centre. In the wake of the same, the government is set to file a review petition before the Supreme Court today. The Centre will put forth its arguments that the dilution of the act would reduce the fear of law and would lead to more violations. Had it done so before only, then this disruption of a nationwide strike would have never occurred.

The Congress Party had also urged the Centre to file a review petition but to no avail until today. The grand old party will also be organising a demonstration on April 4 at Parliament Street against the verdict. Widespread criticism and outcry from the Dalit community was witnessed on March 20 when the apex court banned automatic arrests and registration of criminal cases under the SC/ST Act.

Violent protests are being seen in Punjab’s Patiala, Rajasthan’s Bharatpur and Uttar Pradesh’s Agra and Meerut. The protesters have also blocked trains in Bihar and Odisha. The Punjab government has ordered clampdown as a precautionary measure. While Army and paramilitary forces are on standby, internet services were suspended at 5 p.m. yesterday and will continue to be suspended till 11 p.m. today. The Central Board of Secondary Education (CBSE) also postponed the exams scheduled for today across the state.

The Union Law Ministry, due to stiff pressure from within the NDA and opposition decided to file a review petition in the Supreme Court. Had it realised it before itself that the dilution of the SC/SC Act will only increase the number of atrocities on the marginalised communities and will further deepen the discrimination persistent in the Indian society. As usual, this government failed to understand the minorities’ needs and were conveniently trying to sideline them, but the opposition was quick enough in mounting pressure and forcing them to file a review petition with regard to the same.