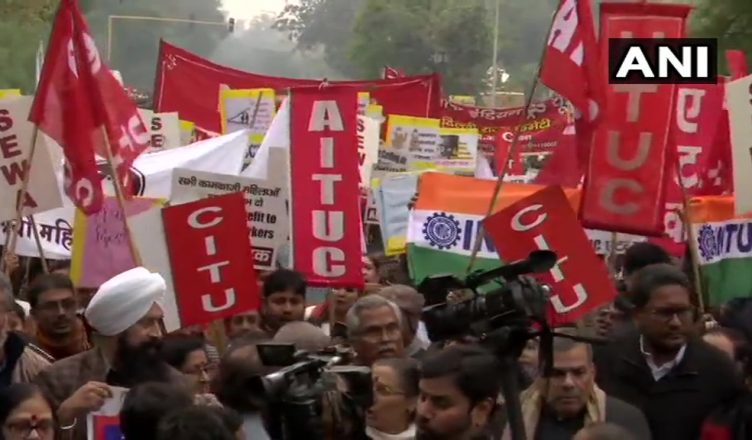 Today’s Bharat Bandh is the 19th one since Indian liberalized her economy in 1991 and the fourth one since 2015. The striking workers have a list of 12 demands including a minimum wage of Rs. 21,000 per month, better job creation, roll back of policies on contractualisation of workforce, discussion on labour reform, assurance of not privatizing profit making public sector enterprises and a universal pension system.

As is its wont, rather than listen to the striking workers and allaying their anxieties, the government has chosen to be combative and warned employees of severe consequences should they take part in the strike. Nevertheless, the unions claim that over 200 million workers from both formal and informal sectors are participating in the Bharat Bandh. The nature of these demands indicates that people concerned about being excluded from the progress of the nation.

For all its talk of making India a strong country the government is clueless on how to address issues of inclusive and sustainable development. It is of common sense that for a nation to be strong, its economy must be strong. And more importantly there must equitable socio-economic justice. After all, the quality of life is of paramount importance. Ensuring distribution of wealth is not only a moral duty, but it also makes economic sense.

For an economy to sustain there must be demand which encourages producers, thereby generating employment. However, the policies of the BJP have been detrimental to the economy. The government is unable to see the reality that the slump in the economy is rooted in diminishing demand as people do not have money with them. Accepting this would mean that the BJP will have to take the responsibility for demonetization, which rendered useless 86% of the value of currency in circulation overnight—that too in a cash dependent country like India where about 95% of the transactions are still made in cash.

Thus, the response of the government has been a brazen denial that demonetization was an absolute failure that has killed jobs and the economy. That certainly doesn’t fit well with the BJP’s fantasy of being concerned about India and India’s progress. And to feign deep concern for the country’s economic health, the government has announced a slew of sops for industrialists. However, this would not revive the economy as the issues are on the demand side (with people not having money and burdened with increasing prices), while the government is groping in the dark on the supply side (sops for industrialists). On the contrary, it would only worsen the problem.

What is needed is to remonetize the economy. We need to put money into people’s hands. We need to generate jobs so that people’s incomes increase and thereby they spend more. Lack of spending—which can be inferred by the diminishing demand in various sectors—translates to fewer jobs being created and thus a cycle is created. This cycle must be corrected and that requires a cerebral response from the government, rather than a muscular, insensitive one that it has become notorious for. The only way we can get the government to talk about the economy is to continue asking questions and discussing matters of national concern. The media is unlikely to do it and so every right thinking citizen must make socioeconomic issues a part of public discourse. Rather than indulging in meaningless trolling—which clearly is the objective of the supporters of the BJP to digress from pertinent issues of national importance—we must discuss India’s future and prospects for inclusive and sustainable development. We must discuss amongst ourselves and with those who differ from us ideologically. And we must resist every attempt to muddy the quality of public discourse. While public discourse in India is bellicose over primordial loyalties, Finland is debating its Prime Minister, Sanna Marin’s proposal of a four-day-week and six-hour word day so that people have more time for families, loved ones and hobbies! That’s the path to development. Not being dismissive about labour and socioeconomic issues.