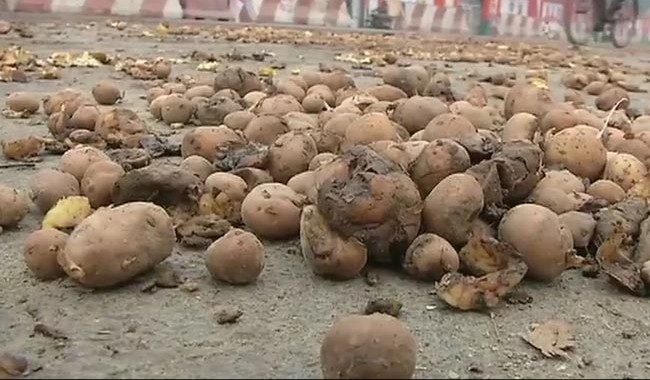 Angered by the Adityanath-led Government being unable to address their woes, the farmers of the state threw quintals of potatoes outside the Vidhan Sabha and Chief Minister’s residence.

A similar scene was also witnessed outside Raj Bhawan which houses Uttar Pradesh Governor Ram Naik and his family.

It is natural for the distressed farmers to get angry. Their crops are being wasted and the BJP government in the state is doing nothing to address the issue.

A farmer said that they get Rs. 3-4 per quintal from Mandis, whereas they want Rs. 10 per quintal.

Their pleas are falling on deaf ears and in a situation like this, such a reaction is natural.

The BJP Government and Yogi Adityanath have turned blind eye towards farmers’ grievances and doing nothing to bring them any sort of relief.

While the farmers are in distress here, the state chief minister is busy campaigning faraway in Karnataka. It is utterly disappointing.

While his own people are suffering in his state, he himself is busy in scoring some political points in election-bound Karnataka.

Senior Superintendent of Police (SSP) Lucknow Deepak Kumar said that the vehicles involved in throwing potatoes have been identified and an action would be taken against this.

The sad part being that while the police is ready to take action against those who are only demanding for their rights, the government is least bothered to extend an helping hand to these needy farmers.

In another such incident, the bedding provided to people in night shelters a day before the Chief Minister’s visit in Varanasi, were taken back right after he left.

It is shocking to see such an apathetic attitude of the BJP government towards those who are in dire need of such essentials.

The crony capitalist government is acting like a dictator, suppressing the already suppressed.