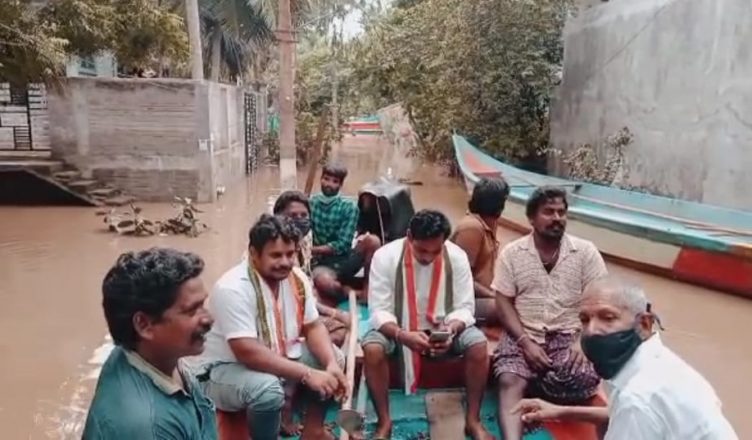 With floods affecting the lives of lakhs of people in the Godavari districts of Andhra Pradesh, Youth Congress leaders went to the remotest villages to assess the damage and provide relief. A team led by Ankem Seetaram of Narsapuram constituency visited the affected areas on 21st August.

Recalling the arduous journey, they had to undertake to reach the villages, Seetaram said that it was a strange experience to walk to some villages, while they had to hire boats to commute within the villages. Along with his team of Youth Congress members, comprising Koraginjala Hari Kiran, Somu Nagakesava Babu, Rokkala Benny Paul, Visakodeti Subbarao, Ankem Venkataramana and Nakka Shankar, Seetaram noted the distress of the villagers particularly in the island hamlets.

They stated that there is extensive damage to both food and cash crops with several paddy, banana and betel plantations being inundated. The youth Congress members demanded that the government must immediately assess the damage and provide adequate compensation. Further, they also demanded that the government must construct flood shelters for the people who live near the Godavari embankment as flooding is a perennial problem in coastal Andhra Pradesh.

Although there has been colossal damage caused due to the flooding in the Godavari and Krishna districts of Andhra Pradesh, there has been little coverage in the media. The plight of the farmers and the most vulnerable sections of society are seldom discussed as it doesn’t make for good TRP. However, the dedication of youth in the smaller towns is an inspiration for all Indians who seek to ensure social justice.

When asked why the members of Congress were risking their own lives in the midst of a pandemic to travel to extreme remote hamlets despite faring poorly in the state elections, Ankem Seetaram said that he is inspired by former Prime Minister Rajiv Gandhi. He recalled a quote of Rajiv Gandhi, “Elections are won and lost but the work of a nation never ends. We will not falter in our resolve to do our duty by India”, which he said ere the guiding principles of many in the Youth Congress. He added that it wasn’t just during the floods that he and his team have been active and that they have been rendering active service every time there is a crisis.

In response to whether he felt that the national media ignores the problems of rural India, he said that it was a societal problem. He elaborated saying that many people do not understand the diversity of India and the myriad problems that await attention. The so-called national media is restricted to the English and Hindi medium opinions and people do not take the effort to understand what the ideas and problems of the other languages are. He once again underscored the contribution of Rajiv Gandhi who laid the foundation for the Panchayat Raj institutions, which brought democracy to the grassroots. He believes that there must be more devolution of power so that when there are contingencies, decision making will be swifter and hence there would be more efficient administration.

Despite a gruelling day overseeing relief work and listening to the problems of villagers and farmers, Seetaram and his team displayed no signs of fatigue. They explained that there is no time to rest for the youth as India needs to return to the path of progress, from which it digressed since the BJP came to power in 2014. They asserted that only Congress assures progress.