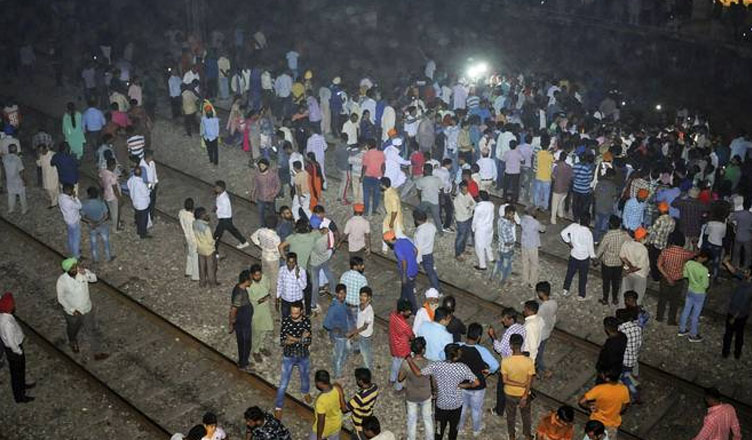 At least 61 people were killed and 74 injured after a speeding train ran over a crowd who was watching the burning of Ravana effigy on Dussehra (Friday) in Amritsar.

The incident took place near the manned crossing at Joda phatak, where people have gathered to watch the customary burning. As the crowd was in huge numbers, people spread and a few even stood on the tracks to get a better view of the effigy.

As the effigy started burning and the firecrackers inside it started going off, it kind of overpowered the sound of the approaching train.

As the people were capturing the burning of the Ravana, it also tend to captured the horrible incident. Here is the video:

The entire country is in a state of mourning and political leaders expressed the condolences to the families of those who lost their loved ones in the mishap.

The Punjab government as announced Rs. 5 lakh compensation to the families of the ones dead. The Centre has also announced an additional compensation of Rs. 2 lakh.

Prime Minister Narendra Modi wrote on Twitter, “Extremely saddened by the train accident in Amritsar. The tragedy is heart-wrenching. My deepest condolences to the families of those who lost their loved ones and I pray that the injured recover quickly. I have asked officials to provide immediate assistance that is required.”

Congress President Rahul Gandhi and BJP President Amit Shah, both, asked their respective party workers to reach the accident site and help with the rescue operation.

“The train accident in Punjab in which over 50 people have died is shocking. I urge the state government and Congress workers to provide immediate relief at the accident site. My condolences to the families of those who have died. I pray that the injured make a speedy recovery,” Gandhi tweeted.

“I am pained beyond words to learn about the tragic train accident in Amritsar. I have spoken to the local BJP unit and asked our karyakartas to join the rescue operation. My deepest condolences with those who have lost their loved ones. I pray for early recovery of those injured,” Shah tweeted.