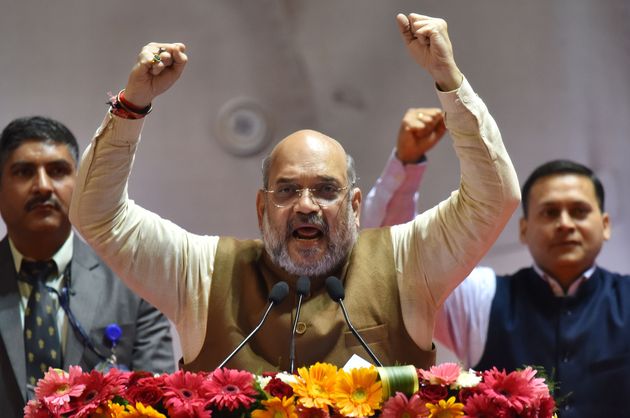 Home Minister Amit Shah on Saturday appealed to people, saying “Your vote to the BJP candidate will make Delhi and the country safe and prevent thousands of incidents like Shaheen Bagh.”

Addressing a gathering at Jawaharlal Nehru Stadium at an even called ‘Jeet Ki Goonj’ Shah promised voters that if they chose the lotus symbol on election day, the party would ensure that the protesters would have to vacate the place by February 11th, immediately after the results are declared. Periodically using threats in order to scare peaceful protestors and mobilize voters, Shah said, “. “Push the button with such force that the current makes the protesters leave Shaheen Bagh on February 8.”

The Citizenship Amendment Act (CAA) has sent ripples throughout our secular country. It makes religion the criteria of citizenship in India. The Act has seen much controversy, with peaceful protests against the CAA spread across India, from Delhi, Mumbai, Kolkata and Bangalore to Gorakhpur, Firozabad, Kerala and Assam. No part of India is silent on the issue, with marches, sit-downs, peaceful slogans and a human-chain prevalent in the country.

But while Shah is asking people to chant Bharat Mata ki Jai, he himself isn’t respecting the people’s constitutional justice and right to dissent by promising to remove, even if by force, the peaceful dadi’s of Shaheen Bagh. Why is the BJP so scared of public opinion and the voices of dissent? Isn’t democracy and the spirit of our country about being able to express opinions without being detained or forcefully removed? Mr. Shah, please don’t kill the spirit of Bharat Mata.