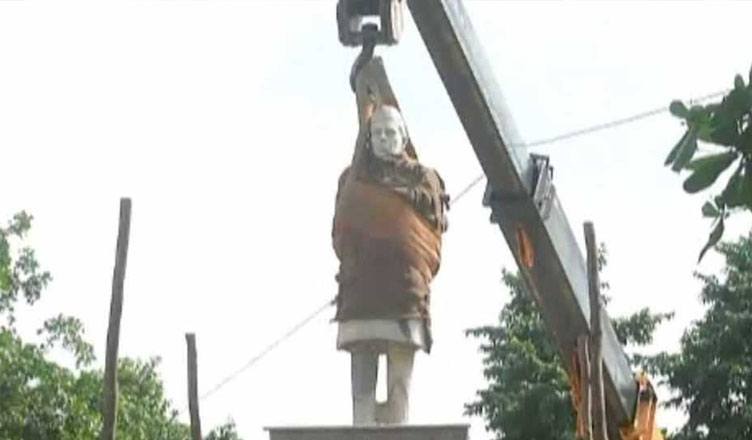 The desperation of the Bharatiya Janata Party (BJP) to make people forget about country’s first Prime Minister Jawaharlal Nehru and his deeds was once again witnessed when the latter’s statue was removed from Balsan Chauraha in Allahabad on Thursday.

However, authorities justified the move by stating that it has been done keeping in mind the upcoming Kumbh mela to be held in January 2019. They said the statue has been removed for beautification work.

The Congress workers in Allahabad staged a protest against the removal of the statue and alleged that it was being done intentionally.

The officials only maintained that Nehru’s statue was removed because it was in the middle of the road and that roads are to be broadened due to the upcoming Kumbh mela. However, they failed to answer why was Deen Dayal Upadhyay’s  statue was not removed.

The Congress workers present there said that it was unfortunate the way the statue of India’s first Prime Minister Pandit Jawaharlal Nehru’s statue was removed.

“To eliminate one ideology, the Uttar Pradesh government and the government of India have resorted to a very poor act. This is very unfortunate for the country,” they said.

For the time being, Nehru’s statue has been placed in a nearby park.

Howsoever hard BJP tries to remove Nehru’s name from history, but his deeds and the sacrifices he made for India are unforgettable and indelible. His efforts for attaining freedom and his contributions to lift India up post-Independence can never be forgotten.

The people of India can never forget the names and deeds of such great men.