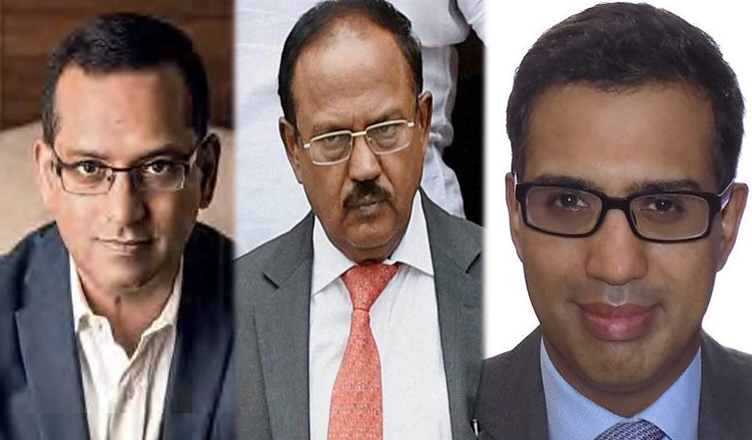 National Security Advisor (NSA) Ajit Doval’s younger son, Vivek Doval, runs a hedge fund in the Cayman Islands, widely regarded as a tax haven. The expose had been made by The Caravan, which has accessed trade documents from the United Kingdom, United States of America, Singapore and Cayman Islands.

The Caravan has also found that Vivek Doval’s business is closely connected to businesses run by his elder brother, Shaurya Doval, a Bharatiya Janata Party (BJP) politician and the one who heads the India Foundation, which acts as a close advisor of the central government.

Along with Vivek Doval, Don W Ebanks and Mohamed Althaf Musliam Veetil are also the directors of the hedge fund. Ebanks is named in the Paradise Papers, a leaked database of 13.4 million confidential electronic documents relating to offshore investments.

The legal address of GNY Asia fund shows that it is under the care of Walkers Corporate Limited, a firm that is also named in the Paradise Papers as well as in the Panama Papers, another 11.5 million leaked documents that detail client information for offshore entities.

An initial seed funding or capital is required for a hedge fund to be operational. The source of funding received by GNY Asia is unknown.

The official custodian for GNY Asia is Edelweiss Custodial Services Limited, which holds assets on behalf of the hedge fund.

In February 2017, the Edelweiss Group hosted the Edelweiss India Conference, an investor’s conclave, of which GNY Asia was a part.

As per the document submitted to the US government, GNY Asia Fund was valued at $11.19 million over a year later, in mid 2018. In contrast to it, other companies which were present at meetings had much higher assets. For instance, Motilal Oswal Asset Management held close to $2.5 billion or Rs 17,000 crore, of equity assets under its management at the time. HDFC Life Insurance Company had assets worth nearly Rs 92,000 crore. Kotak Mahindra Asset Management Company was managing assets worth at least Rs 88,000 crore at the time those meeting were held.

The Caravan sent a questionnaire to Edelweiss Custodial Services, asking what parameters were considered before accepting GNY Asia as a client and including it its meeting, but it did not receive any response.

Another thing which raise an eyebrow is that GNY Asia Fund did not have a Legal Entity Identifier (LEI) code at the time of these meetings. the LEI is a 20-character code, which helps in creating an identity for a firm, company or any business that intends to enter into financial transaction, and which came into being post the late 2000s financial crisis that struck the American and European markets. GNY Asia got its LEI in September 2017.

It is also known through figures presented by the government to Parliament last year showed that there was a jump in the FDI received from nations such as Cayman Islands and Hong Kong.

Inflows from the Cayman Islands rose in a single year from $71.03 million to $1.23 billion. This is almost as much as the money which came to India from the same place in the first 16 years of the century.

Now, coming back to the close links between the businesses of the two brothers.

A research analyst, Akhul Jhajharia, who represented GNY Asia Fund at one of the meetings, was formerly employed with Zeus Caps, which was co-founded by Shaurya Doval.

The LinkedIn profile of a Priyanka Dua, who is an employee of Torch Investment, states that she is working with GNY Capital, the firm advision GNY Asia.

Torcia Advisors is registered to a residence in Dwarka, which is owned by Ajit Doval. He, in a letter to the registrar of companies in 2015, had stated that he had “no objections” if ZAD (now known as Torcia) were to use this residence as its registered office.

What is ironical is that Ajit Doval, in 2011, had presented a report on offshore entities and tax havens and in the same, had asked for a crackdown on the same.

“These monies, which have no declared or known owners, are laundered into the official financial markets of the world through the intervention of tax havens, which are countries that levy no tax or levy what is an apology for tax, so as to attract capital to their countries. These tax havens are largely tiny tots in the global geography and demography but they hold the rest of the world to ransom … This money, besides being tax evaded, is entirely unsupervised,” the report mentioned.

Doval, through the report, recommended that every electoral candidate should state in their election affidavit that they do not hold illegal money abroad.