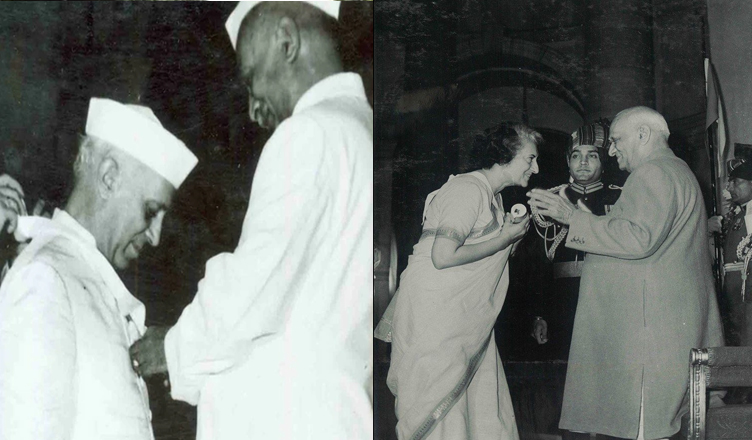 It has often been claimed that former Prime Minister Jawaharlal Nehru and Indira Gandhi conferred the Bharat Ratna award on themselves. The most active propagator of this claim has been the Bharatiya Janata Party (BJP), which has left no stone unturned in spreading this misinformation.

However, there are several articles on various media outlets which have busted this fake claim and proved that the two recipients (Indira Gandhi and Rajiv Gandhi) had nothing to do with the decision.

Social media is afloat with theories that Nehru, during his prime ministerial term, nominated himself for the Bharat Ratna award.

Basically, it all started from the point of nomination process of the award. There is no law as such but a convention that it is the prime minister who recommends the names to the president of India, who then accepts those nominations.

It is only a convention and not a law because this process is neither mentioned in the official gazette notification of India dated January 2, 1954, which instituted the Bharat Ratna nor in the additional notification issued on January 15, 1955, to allow the honour to be awarded posthumously.

In 1955, Jawaharlal Nehru was conferred the Bharat Ratna award, the decision for which was fully taken by then the President, Rajendra Prasad.

In fact, Nehru was on a visit to Europe when the decision for the award was taken.

“In doing so, for once, I may be said to be acting unconstitutionally, as I am taking this step on my own initiative and without any recommendation or advice from my Prime Minister; but I know that my action will be endorsed most enthusiastically…” Prasad said on July 15, 1955.

Same is the case with Indira Gandhi.

Just like in Nehru’s case, Rajendra Prasad took the decision, in Indira Gandhi’s case, it was the then President, V.V. Giri who took full responsibility for conferring the honour to her.

The trigger was of course the recently concluded 1971 war, which resulted in Pakistan’s defeat and creation of the new country of Bangladesh. Not to forget was the stemming of the huge humanitarian crisis in East Pakistan (now Bangladesh) which precipitated Indira Gandhi’s decision to go to war.

Indira Gandhi was conferred the Bharat Ratna award in March 1972.

The Bharat Ratna Award is given for “exceptional service towards the advancement of art, literature and science and in recognition of public service of the highest order,” and indeed, both Nehru and Indira Gandhi, during their tenure as Prime Minister, achieved such milestones which paved the way for India towards its developmental journey.

No, Pt. Nehru did not award himself the Bharat Ratna

Nehru @125: When and how he was conferred Bharat Ratna

One thought on “A tale of two Bharat Ratna’s: When Jawaharlal Nehru, Indira Gandhi got their fair share”