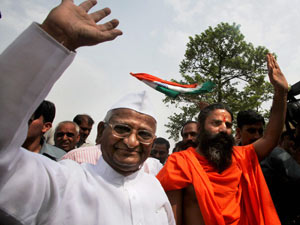 During the Indo-Pakistani War of 1965, Hazare was posted at the border in the Khem Karan sector. Driving a truck, he was the sole survivor of an enemy attack. The experiences of wartime, coupled with the poverty he grew up in, highly impacted him. He considered dying by suicide at one point but, instead, turned to ponder the meaning of life and death. Speaking on the attack during the war, he said, “It sent me thinking. I felt that God wanted me to stay alive for some reason. I was reborn in the battlefield of Khem Karan. And I decided to dedicate my new life to serving people”.

During the Indo-Pak war, Hazare survived a road crash while driving for the army. He interpreted his survival as a further sign that his life was intended to be dedicated to service.

He had another close escape in Nagaland where one-night underground Naga rebels attacked his post and killed all the inmates. He had a miraculous escape as he had gone out to return nature’s call and hence turned out to be the lone survivor. How far could he have gone to relief himself that he didn’t hear any gunshots or screams?

In his three brushes with death, twice he was the lone survivor. On all the three occasions he thought that he has a bigger purpose in his life. However, it took him 15 years to actually understand the sign that he was not made for the army. An INC spokesperson called him a deserter in a press conference but he was not a deserter to the army but to his fellow army men whom he left to be ambushed and die.

Anna came into limelight as his campaign against corruption gained strength through social media, building a massive network of supporters with the help of the RSS. Initially, they approached Ramdev, a populist Indian yogi to be the figurehead for this campaign but his connections to the right-wing Sangh Parivar threatened to damage the credibility of what was perceived as an apolitical movement. This led to him being replaced by Anna Hazare, a well thought move by the RSS. All political connections to the movement were kept hidden to deceive people. Hazare with having links with late RSS leader Nanaji Deshmukh with whom he worked as a secretary. Hazare denied any such associations to keep his image clean. Whereas his own secular image was questioned by many. Dalit activist Kancha Ilaiah commented that “The Anna movement is an anti-social justice, manuvadi movement. The Dalits, tribals, OBCs and minorities have nothing to do with it. We oppose it. Activist Anoop Kheri claimed that “The language, symbols used by the movement clearly reflects its upper caste hindu nature, a very rightwing Hindu patriotism is being used to get the entire country against corruption.

In a press conference in April 2011, Hazare praised Narendra Modi, the then chief minister of Gujarat and Nitish Kumar, chief minister of Bihar for their efforts on rural development, saying that other chief ministers should emulate them. Subsequently, Modi wrote an open letter to him, hailing him as a Gandhian. Despite 2002 riots under his belt, suddenly, in May 2011, just before the India against corruption movement, his views changed again during his visit t Gujarat. His convenience for a bigger goal assigned to him during his visit to Gujarat, Hazare changed his view and criticized Modi for rampant corruption. He urged Modi to appoint a lokayukta. He also commented that the media had projected an incorrect image of vibrant Gujarat. It was a façade to keep people in dark as media was running Anna 24*7.

RSS got more then it bargained for after the fall of government with the help of false claims of scams under UPA. RSS puppet government is in center making laws which have threatened enough the democracy of India selling India piece by piece. Threatening every institutions validity which were hailed so far. Movement is required again by the Indians to save democracy the earlier the better.