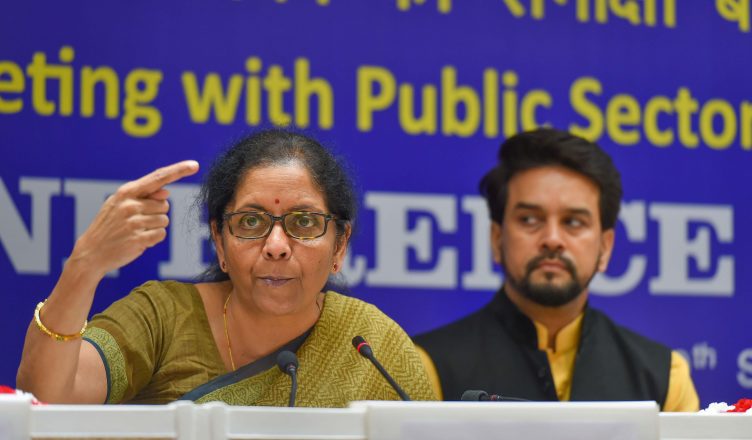 Finance Minister Nirmala Sitharaman during a twitter spat recently said that the economy is in safe hands. However, a few days ago Defense Minister Rajnath Singh was complaining poetically that the pain is in the ‘hand’. The confusion over the what metaphors to use is perhaps the right metaphor for the BJP government—no one knows what’s happening or what needs to be said—let alone knowing what to do.

The best evidence of their cluelessness is the assurance by Sitharaman’s junior minister Anurag Thakur who claimed in late March that the pandemic will not have an impact on India’s economy. While he drew flak for it, he was perhaps unwittingly right in his assessment. The pandemic could do nothing to alter the course of the already plummeting economy. Even before the pandemic hit the Indian economy, the BJP’s maladministration had given it several gnashes.

India’s GDP growth was the worst in 11 years—in other words, the worst since the Global Financial Crisis. The National Statistical Office had reported that the manufacturing sector had posted a mere 0.03% growth in FY 2019-2020. Even the construction sector which has a spillover effect had posted a measly 1.3% growth. The overall business sentiment was of doom with the gross capital formation remaining low and the growth of deposits in banks also declining to 7.9% indicating low-level savings.

With India’s economy severely damaged by the BJP, there was a 2.8% contraction in investment, while a 3.6% fall in exports is evidence of the ‘Make in India’ project being an utter failure, despite it being one of PM Narendra Modi’s pet projects. The BJP’s policies had already resulted in unemployment being the highest in 40 years. Cognizant of these realities, the harshest critics of the BJP expected the GDP growth of around 4% in the last quarter. The BJP however could not even match this low expectation of them and posted a growth of a mere 3.1% in the quarter before the pandemic hit the country.

One can only imagine the nightmare India is headed for. And the BJP is quite capable of going beyond the ‘expectations’ and performing worse than anyone imagined. These are not just numbers which can be changed by tweaking, fudging and some creative accounting as the BJP fallaciously believes. These numbers are indicative of human realities and the gravity of the crisis we face.

Instead of indulging in twitter spats or mocking the Congress party for its contributions to alleviate the crisis, Nirmala Sitharaman must take a hard look at how the BJP destroyed India’s growth in addition to compromising national interests in several other facets. If she has the courage, she must advise the Prime Minister Narendra Modi to focus on administration, rather than framing silly slogans like ‘plug and play’. Going by the precedents he set, it is unlikely that Narendra Modi understood what he was talking about. Nevertheless, if he meant footloose industries by ‘plug and play’, he must realise that being overly dependent on them is a risk because they can move out with the slightest changes in business environment. The focus should be on manufacturing, a sector which the BJP’s policies have destroyed.

If the BJP wants to continue talking in metaphors, they must realise that the crises India faces is because the administration has ‘gone out of hand’. Matters will improve only when the administration is returned to the ‘helping hand’.